Home / Blog / The Internet of Plants and Trees

There’s a lot going in the world of technology focused on plant life, and I’ve recently seen a few stories about plant tech that captured my interest

We’re all familiar with wearable devices. In fact, there’s a pretty solid chance that, if you’re reading this post, you’re wearing one now.

There are even wearables for plants.

I’m not sure that there are many folks who’ll be putting sensors on the philodendron in their living room, but if you’re a farmer, own a greenhouse, or are a serious gardener, it might be nice to know when your crops and plants need watering. I wasn’t familiar with them, but electrodes to monitor for drought stress have been around for a while. But earlier ones were difficult to keep attached. So researchers played around with two different types of electrodes:

…one made of nickel deposited in a narrow, squiggly pattern, and the other cut from partially burnt paper that was coated with a waxy film. When the team affixed both electrodes to detached soybean leaves with clear adhesive tape, the nickel-based electrodes performed better, producing larger signals as the leaves dried out. The metal ones also adhered more strongly in the wind, which was likely because the thin squiggly design of the metallic film allowed more of the tape to connect with the leaf surface.

Next, the researchers created a plant-wearable device with the metal electrodes and attached it to a living plant in a greenhouse. The device wirelessly shared data to a smartphone app and website, and a simple, fast machine learning technique successfully converted these data to the percent of water content lost. (Source: Printed Electronics World)

Next up for these researchers: making sure the devices work in the great outdoors.

Taking Inventory of the Forest

And the technology can inventory more than a thousand trees in just a few hours.

If a tree tweets in the forest…

My favorite story was one a friend in Boston saw on local news last month. It seems that there’s an old oak in a forest in central Massachusetts that tweets. This tree, one of a growing number of “witness trees” that monitor and report on their health, is wired with a number of sensors: 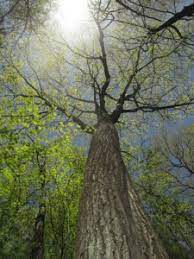 The tree has a sap flow sensor to measure how much liquid is flowing up and down the tree. There is a growth sensor that is monitoring the tree in real time. There is a camera constantly taking pictures to measure the leaf canopy. All of this data feeds into code, powering the Witness Tree’s tweets. (Source: CBS News – Boston)

@awitness tree is part of the Harvard Forest. Its bio on Twitter reads: “Witnessing life as a tree in a changing environment for more than a century. Views are own – sort of (data translated by scientists and communicators at HF”

Scientists at HF (Harvard Forest) envision an internet of trees communicating information on their health that will help preserve forests and our environment from the impacts of climate change. Their witness tree is “the oldest known living organism on social media.” (Source: Harvard Forest)

Here’s a bit of detail on those sensors. The growth-measuring sensor is a dendrometer:

Inside the dendrometer is a spring-loaded metal rod and a resistor. The spring ensures the metal rod is always pushing out towards the tree trunk. An electrical excitation of known voltage is sent through the resistor. Any change in circumference of the trunk causes the rod to be pushed in or out, which changes the length of the resistor through which the electricity flows, and therefore affects the returned voltage. The measured voltage difference can then be translated into a radial distance (growth measurement).

The sap-flow sensor measures how the sap moves around and how much water the tree uses.

Three probes are installed inside the bark of the tree, embedded into the tree’s sap transport network. The middle probe produces a heat pulse and the two outer probes (upstream and downstream) are equidistant from the heat probe. The sensor measures the amount of time it takes for the heated sap to reach an outer probe.

Then there’s the PhenoCam, a digital camera that looks at seasonal changes over time. The Harvard Forest PhenoCam is part of a worldwide network that takes pictures every 30 minutes.

There are also sensors in the forest that measure soil and air temperature, precipitation, radiation, wind speed and direction, etc.

All this gear enables the witness tree to provide its twitter followers – it has more than 10,000 of them – with tweets like this recent one:

My acorns are an important food source for wild turkeys. More than 221 acorns can be consumed by a single turkey in one meal.

Lots going on out there in the Internet of Plants and Trees.