Home / Blog / “The science behind the boom”

The past year has been a tough one. Most of us very likely know people who’ve had covid; many have lost family members, friends, colleagues. Most of us have very likely seen small businesses – shops and restaurants – close permanently. Many know folks who lost their jobs.

We’ve all been missing out a lot of things: getting together with family and friends; celebrations great and small; going to church. And we’ve all been missing out on the community gatherings that we may not even be aware of how much we enjoyed them – until they’re gone. One of which is Fourth of July fireworks, which many cities and towns had to cancel last year. 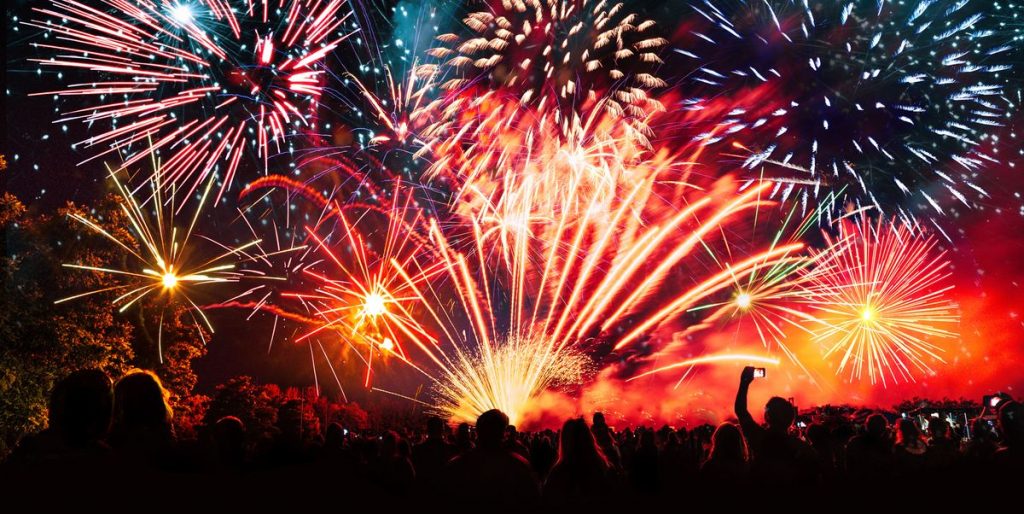 Fortunately, in many places, fireworks are back.

And engineer that I am, this makes me think of the technology that goes into those fireworks displays that light up the July sky. I posted about celebrating the Fourth a few years back, but I thought it was a topic that’s worth revisiting. So – thanks to an article by Kevin Clemens I found on DesignNews –   here goes with Kevin’s list of “interesting fireworks facts to help you understand the science behind the boom.”

In the beginning, there and here

The Chinese get credit for inventing fireworks, sometime around the second century B.C. Those first firecrackers were bamboo stalks. To get a bang out of them, you tossed them in a fire. Once the hollow air pockets heated up: BANG!

But it took another 1,000 years or so before “modern” fireworks came about. That’s when the Chinese concocted gunpowder by combining potassium nitrate, sulfur, and charcoal. And by stuffing the gunpowder into the bamboo stalks, we had fireworks.

By the Middle Ages, fireworks had made their way to Europe, and the Italians – I am proud to say – who were the first Europeans to produce fireworks.

Although July 4th wasn’t made a federal holiday until 1941 – something I did not know – we’ve been celebrating it since 1776, when our Continental Congress decided to declare our independence.

Now, on to the science and technology

Launch: There’s nothing new about some of the science and technology. The firework shell is set off from a mortar, which is nothing more than a short steel pipe. A black powder charge, the lifting charge, in the pipe is set off and thrusts the shell up and out. The lifting charge also lights the shell fuse. When the shell gets to its launch altitude, there’s a bursting charge that blows the shell up. (This is how it’s generally done. In some cases, although it’s more expensive, a rocket is used to launch the shell.)

Colors: The colors are produced by combustible metal salts: the most commonly used are “strontium carbonate (red), calcium chloride (orange), sodium nitrate (yellow), barium chloride (green) and copper chloride (blue).” The most common metal salt – sodium chloride, i.e., table salt – won’t work because it “absorbs water and would produce a fizzle rather than a sizzle.” And while red is a very popular color for fireworks, reds – when color is combined with pyrotechnic compounds – produce carcinogenic “junk” that drifts back down to earth. (Researchers have found a non-carcinogenic, “environmentally-friendly” approach. Just to be on the safe side, you might want to make sure your blanket and lawn chairs are upwind from the junk!)

Patterns: Remember running around the backyard in your pj’s writing your name with a sparkler? Those stars you see when a shell bursts may well be pieces of sparkler compound. Those starry night fireworks are the most common ones. More sophisticated designs are created by having different colored sections that ignite at different times, using separate fuses. Patterns are also created using star pellets. Explosive charges are deployed to make the outlines grow larger so you can see what they’re supposed to be.

The physics behind it:

Calculating the trajectory for a fireworks projectile, launched from a mortar tube is a straightforward two-dimension kinematics problem. In this case the initial launch velocity is positive, the acceleration due to gravity is negative, and the maximum altitude depend only upon the vertical component of the initial velocity (neglecting air resistance on the shell). The horizontal velocity (moving downrange) is a constant (neglecting air resistance), and the position depends upon the time of flight.

Show choreography: Back in the day, fireworks shows were choreographed by hand. These days, there are design programs and simulation software that let designers see what their displays will look like. And when the show goes on:

Prior to the invention of “e-match” the pyrotechnics were fired by hand using manual switch panels. But now, once the show has been fully programmed, script files can be exported to the firing system to make sure that each launch and explosion is timed to perfection. Better and safer shows are the result.

Environmental and safety concerns:  Red fireworks aren’t the only environmental (and health hazard) problem. To avoid fires being set when residual matter drifts to the ground, many fireworks displays occur near water. That means that perchlorates produced will drift into water, “contaminating rivers, lakes and drinking water.” Air quality can also be temporarily impacted by fireworks displays. Cleaner fireworks are being introduced.

In terms of your safety as you sit there watching the fireworks, thanks to the professionals running the fireworks show, audience injuries are rare-to-nonexistent. The fireworks people buy (legally or illegally) and set off in their backyards are a different story. Thousands of consumer injuries are recorded each year. So be careful out there.

If you’re a fireworks fan, here’s hoping that things are back to normal where you live.

Whether you’ll be celebrating the Fourth of July with the local fireworks display, and/or firing up the grill in the backyard, and/or just breathing a sigh of relief that the worst of the pandemic seems to be behind us, I hope that you all enjoy a Glorious Fourth.