It’s the Fourth of July, and that means fireworks.

Five years back, in my Glorious Fourth post, I wrote about “how fireworks displays have become so computer-driven over the years.” Here’s a bit about the technology involved:

Before a show can be choreographed, the properties for each shell must be logged, including burn time, lift time and effects. Microchips embedded in the shells trigger the fireworks to explode at a specific height, in a particular direction and with millisecond precision.

Curious about what technological changes have occurred since 2013, I did a bit of googling around. 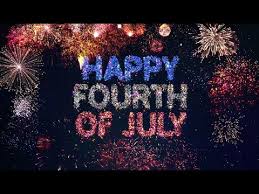 Fireworks in the 21st century are still essentially the same as they ever were— a shell full of gunpowder that launches a payload of black powder and chemically treated “stars” into the sky. (Source: Smithsonian Magazine )

Having said that, Jason does go on to list some of the changes he sees on the fireworks horizon.

Some may ask what the point of fireworks that don’t make loud noises, but some locales are no longer allowing booming displays. Which has led to “quiet fireworks,” which just means designing shows with shells that don’t create as much noise pollution.

That means making colors brighter and even adding other display options like Flogos, corporate logos or designs made out of foam bubbles.

Maybe it’s just me, but I don’t quite see the point of daytime fireworks. There’s something about lighting up the night sky…

One thing that fireworks companies haven’t been able to come up with is a deep and consistent blue. That’s because the copper compound required for blue tends to break down when the temperatures rise. But with better temperature control, the prospect of getting a “more stable blue” is on the horizon.

3-D choreography is another advancement that’s emerging, thanks to computer simulations and 3-D modeling.  Sounds interesting – and something to look forward to.

Pixelburst Shells can generate fireworks in shapes that go beyond the chrysanthemums and waterfalls we’re all used to, “thanks to a microchip inside the fireworks, they can program them to do just about anything that only requires a few pixels.”

Bluetooth lets technicians set off a display, without their having to be anywhere near a fuse or gunpowder, which eliminates a lot of the lost-finger risk associated with fireworks.  Like Jason in the Smithsonian article, Conor gives a shout out to simulation software which let technicians plan and test out complex, elaborate displays. Another safety element in fireworks is that the quality of the mortars themselves has improved, with high-density fiber replacing the dangerous cardboard tubes.

The final bit of technology that Conor sees as essential to a “safer and awesomer” Fourth of July is one that’s been around since well before the Chinese came up with gunpowder 1500 years in the way-back. And that’s the human brain. As he puts it:

Don’t light M80’s off in your hand. Don’t point Roman Candles at your friends. And most importantly, don’t do anything stupid.

Not much to add to that, in terms of safety warnings.

So I’ll end with wishing everyone a wonderfully glorious Fourth of July.