Home / Blog / From the MIT Tech Review: Breakthrough Technologies for 2020 (Part One) 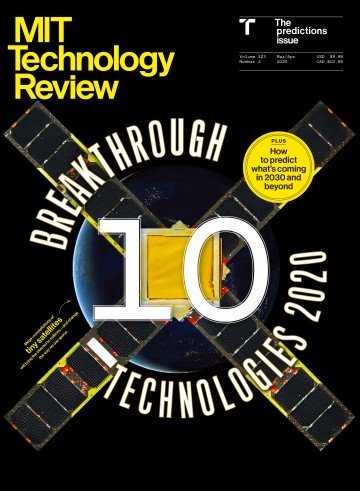 Unhackable Internet: As we become more and more reliant on the Internet for everything from monitoring our health to answering all our questions to doing our banking to getting our news to checking to see who’s ringing our doorbell – not to mention all the macro things like controlling our infrastructure and the nation’s security – there’s often a thought in the back of our minds: what if bad actors decided to take it all down? The answer is an unhackable Internet based on quantum physics. The Delft University of Technology is creating a small, short hop unhackable network that “relies on a quantum behavior of atomic particles called entanglement.” To move their work beyond one small city-to-city network, Delft and others are developing quantum repeaters, and the prediction is that a global quantum network will be possible by the end of this decade. But a smaller scale quantum network, stretching from Delft to The Hague, should be in operation b the end of this year. (Russ Juskalian)

Hyper-Personalized Medicine: One of the reasons that there’s no treatment for exceedingly rare diseases is that there’s no pay-off for discovering the cure for a disease that has so few sufferers. For those disorders resulting from unique genetic mutations, gene medicine – replacement therapy, gene editing, or antisense (which gets rid of or fixes faulty genetic messages) – is becoming a reality. “What the treatments have in common is that they can be programmed in digital fashion and with digital speed, to correct or compensate for inherited diseases, letter by DNA letter. So far, there have been only a few cases where “n-of-1” treatments have been used successfully. But it’s here, now, and we’re going to be seeing more of it. (Antonio Regalado)

Digital Money: If you’ve ever stood in line at Starbuck’s behind someone in their twenties, you know that fewer and fewer people use cash. Some outlets, in fact, no longer accept it. But what’s behind those smart cards and phone swipes is, in fact, “real” money tied to financial institutions and a country’s actual currency. But last year, Facebook introduced Libra, “a global digital currency.” It hasn’t actually launched, but it seemingly prompted China to speed its efforts in this arena. “Now China is posed to become the first major economy to issue a digital version of its money, which it intends as a replacement for physical cash.” Will China be the first to release an international digital currency? Will it be Facebook? We should see something happening on this front this year. I don’t know about you, but I’m going to miss dollars in my wallet and change in my change bucket. (Mike Orcutt)

Anti-Aging Drugs: Now that I’m well settled into middle age, I’m all for bringing on the anti-aging drugs. I don’t necessarily want to live forever, but that’s not what the antiaging drugs are after. Senolytics rid the body of “senescent cells.” These are cells that “can create low-level inflammation that suppresses normal mechanisms of cellular repair,” and can be used to, bye delaying disease onset, help alleviate conditions like osteoarthritis, eye and lung disorders associated with aging, heart disease, cancer and even dementia. Senolytics is one of several approaches. Some will be in large-scale clinical trial this year. General availability of anti-aging treatments is expected within five years. I’m not getting any younger. Let’s get cracking! (Adam Piore)

AI-Discovered Molecules: One of the reasons it’s so expensive to develop new drugs is that there are a nearly limitless number of molecule “ingredients” that could be used. The estimate is that there are roughly 1060 of them out there. Researchers have begun using machine learning techniques to sift through the mega databases that contain information on known molecules and their properties. AI techniques like deep learning are allowing researchers to find those molecules with the most desired properties, and to pinpoint the ones that are worth pursuing. We should see the results of these AI efforts within the next 3-4 years. (David Rotman)

These are the first five breakthroughs on the Tech Review list. Next time, I’ll run through the final five.