My fascination with robotics goes back a long way – to when I was in grad school. Robots back in the day couldn’t do all that much, just a few mechanical things done in a way that made them look, well, robotic. As it has in virtually every other arena, the technology has advanced dramatically over the years. Anyway, knowing of my interest in things robotic, a friend in Boston recently wrote to me about a restaurant there that’s using robots.

Spyye has humans who take care of the finishing touches, but robots are making the food.  Here’s what they have to say for themselves: 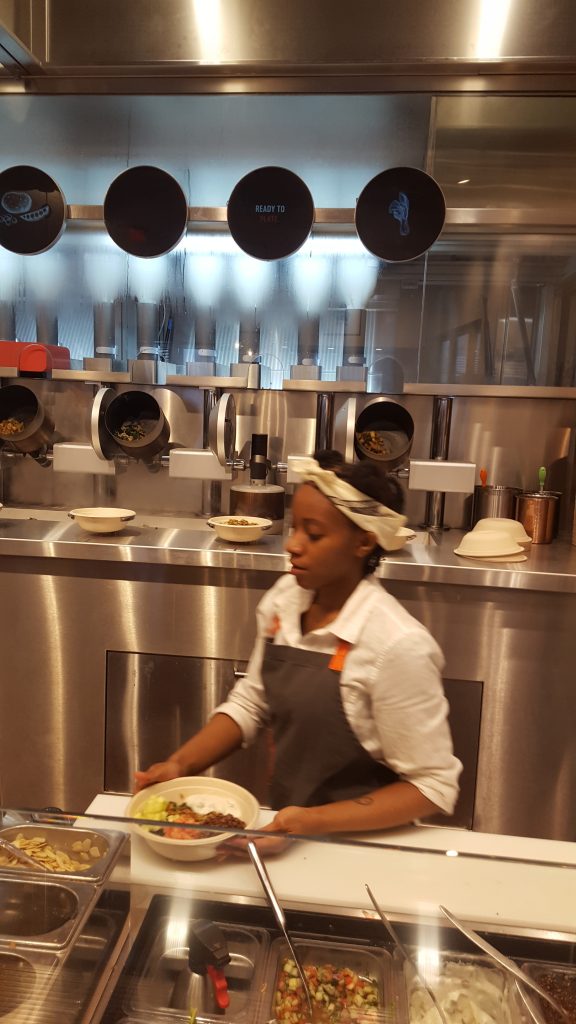 At Spyce, we’ve created the world’s first restaurant featuring a robotic kitchen that cooks complex meals. We created this concept in hopes of solving a problem we found ourselves facing, being priced out of wholesome and delicious food.

The problem solvers were MIT students when they started working on Spyce, and somewhere along the line, they enlisted some help from a Michelin-rated NYC chef to help them come up with the menu, which is a range of rice bowls along various themes – Indian, Thai, Latin, etc.  And because they’re MIT guys, they invoke the name of Nicola Tesla, who invented the induction technology they use to cook the food.

Here’s a description of the concept and how it works:

“While we expected many people to come to the restaurant at first because of the novelty of the robot, the real benefit of our robotic kitchen comes from the quality of meals we are able to serve,” co-founder and lead electrical engineer Brady Knight told Digital Trends. “Being that our robot does the portioning and cooking, we can ensure the meals are being made consistently and accurately. Another advantage is that our technology allows employees to focus on creating more meaningful connections with our guests.”

When customers enter Spyce, they are met with a human guide who shows them to a touchscreen kiosk where they can place their order. This order is then sent to the kitchen — which is visible to the customers — where the food is prepared by robots. Finally, it’s handed over to a human employee to add garnishes like cilantro or crumbled goat cheese, before being distributed to the customer. (Source: Digital Trends)

Wish there were more info about the technology they’re using, but I couldn’t dig much up.

My Boston friend has now been to Spyce twice, and she vouches for the food, giving it high ratings for tastiness and portion size. She did note that, unlike really fast food, it does take a while because it’s all prepared to order. Next time I’m in Boston, I’ll be heading there to check it out. As I said, robots have come a long way since I was in grad school. Fortunately, they haven’t yet replaced us humans – even at a robot-driven restaurant like Spyce.