I’m always on the lookout for novel and interesting gadgets, so I was happy when a friend in Boston pointed the Wave from Embr Labs my way.

The Wave is a wearable, a device you wear on your wrist – remember your wrist? That part at the end of your arm where you used to wear a watch, but now are more likely to have something that tracks how many steps you make? Anyway, the Wave rests on the principle that if you cool or warm one place on your body, it can feel as if you’re cooling down or warming up. It doesn’t actually change your core temperature. It just makes you feel more comfortable. If you’ve 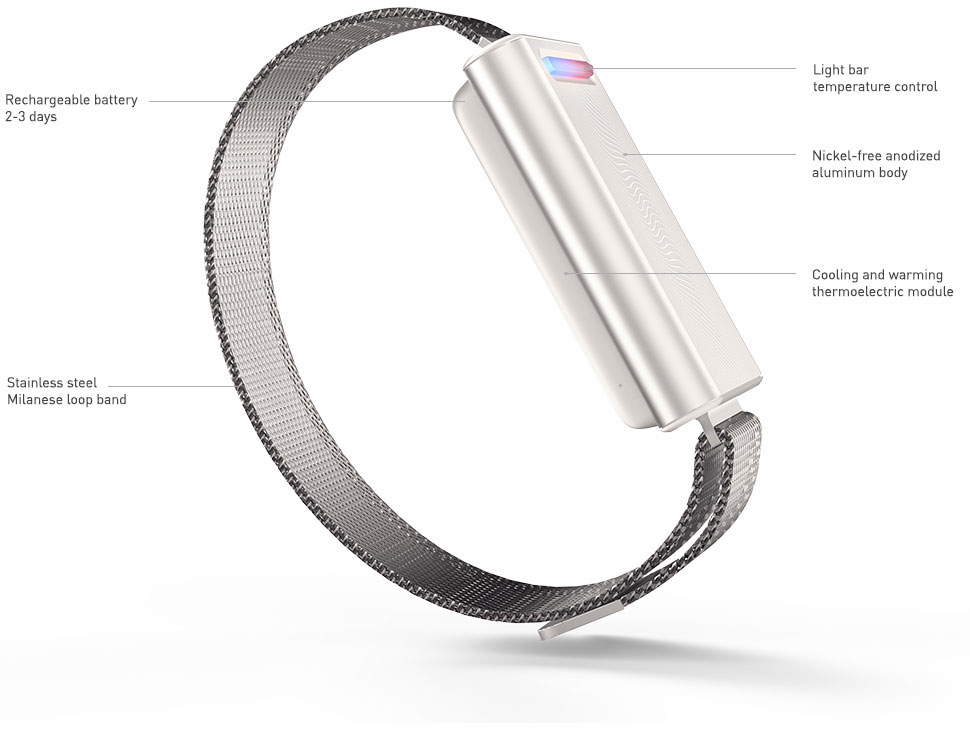 ever run cold water over your wrists on a hot day and felt instantly better, that’s how the Wave works.

It’s the brainchild of some MIT fellows, and their efforts have been funded via Kickstarter (more than $600K raised), as well as through investments from Intel and Bose, and a grant of the National Science Foundation. The product is scheduled to ship in June. Just in time to cool folks down in the summer heat. They’ve presold 4,500 Wave bracelets, which is pretty impressive, given that they go for $300 each.

The principle behind the Wave is the Peltier effect:

Named for French physicist Jean Charles Athanase Peltier who discovered it in 1834, the Peltier effect describes the phenomenon of heating or cooling caused by an electric current flowing across the junction of two different conductors. As the current moves from one conductor to another, the transfer of energy causes one side to heat up and the other to cool down. Embr Wave is basically a series of these junctions (called a Peltier cooler) powered by a small battery and attached to a wrist strap. When placed against the skin, the device makes you feel cooler by reducing the temperature of your wrist a few fractions of a degree per second for a couple seconds at a time.

That’s where the “wave” in Embr Wave comes from. Rather than providing a steady stream of heating or cooling, the device pulses with short waves of temperature fluctuation. It’s a bit counterintuitive, but according to Shames and his colleagues, this burst-based method is actually the most effective way to alter your perception of temperature and provide a sensation of thermal relief. (Source: Digital Trends)

This would, of course, be great, but while the Wave has many who attests to how well it works, it apparently doesn’t work on everybody. Bray is one of those it didn’t really have an impact on.  But it’s an interesting idea. $300 is a lot for a gadget, but if you’re one of those that it works on, what price comfort? I’m sort of considering it…