It’s pretty easy to satisfy this curiosity. Just google ‘tech trends 2018’. That returns around 22 million results. Or if you want to refine your search a bit, look for ‘embedded technology trends 2018.’ That will narrow the results down substantially, to just a bit under 16 million.

Even though last week was a slow week, I did NOT have time to browse 16 million articles, let alone 22 million.  But I did take a glance at a few in each category, and here’s what I found most interesting.

Gartner has a way of boiling things down and communicating them succinctly. Here’s their Top 10 Strategic Technology Trends for 2018. And they even provided it in a handy, boiled-down and succinct infographic.  This is what 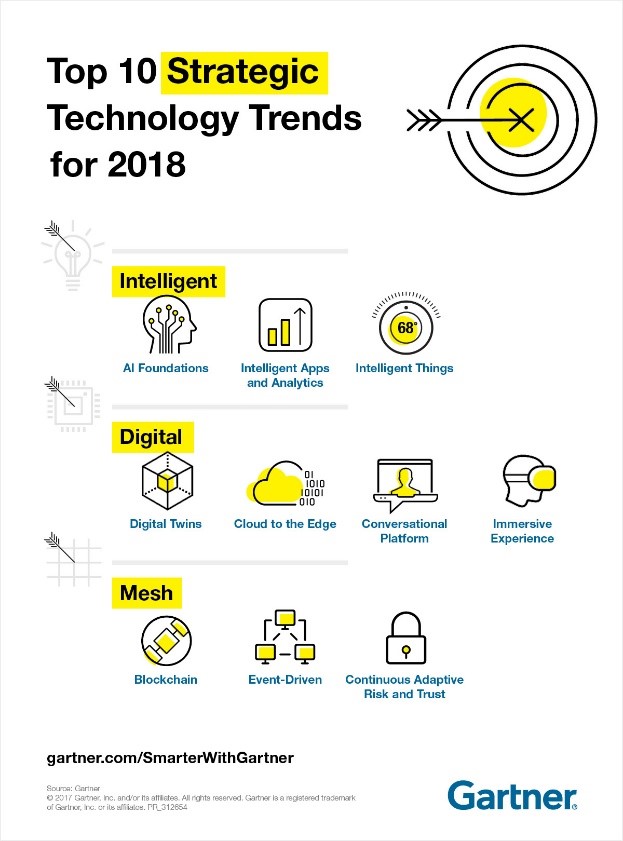 they’re calling the “intelligent digital mesh”, and it’s more or less that same thing they identified as trends for 2017. (There are a few changes: Immersive Experience was called Virtual & Augmented Reality last year; and last year Conversational Systems were part of the Mesh, while for 2018 it’s a Conversational Platform, and it’s now part of Digital; etc.) It isn’t surprising that the trends stay pretty much the same. While there are occasional fads (mostly on the consumer side), trends tend to develop over time, and there are seldom any truly startling or disruptive changes from one year to the next.

Anyway, I wouldn’t have thought of Critical Link as being part of the “intelligent digital mesh,” but although we don’t hit on all these aspects, this is pretty much the terrain our core technology, and the apps its embedded in, inhabits.

Over on Fortune, Jay Samit sees four transformative technologies on the horizon for 2018, most notably that the Internet of Things gets a new first name. From here on out, it becomes the Blockchain IoT.

Combining IoT with blockchain —or BIoT—ushers in a whole host of new services and businesses. For example, BIoT can be used to track shipments of pharmaceuticals and to create smart cities in which connected heating systems better controls energy use and connected traffic lights better manage rush hour.

In 2018, companies will begin to use Application Programming Interfaces, or software used to connect different databases and computer services. Combined with the blockchain Internet of things, it will be as easy to get data from sensors in a warehouse as accessing websites on our mobile phones. When manufacturers, retailers, regulators, and transportation companies have real-time data from sensors imbedded on products, trucks and ships, everyone in the distribution chain can benefit from insights that they were previously unable to get. With BIoT, companies and consumers can also be assured that their most valuable data on the blockchain cannot be hacked.

His other takes on transformative technology – financial-related technology (including cryptocurrency), augmented reality going mainstream, and 2018 as “the year of the bots” are also worth looking through.

Tim Bajarin, writing for PC Magazine, has things to say that are a combination of frightening and fun. On the frightening side, he predicts that North Korea, Russia, and China – and the “armies of hackers” they fund – will be after everything they can get their cyber hands on, including the mid-term elections. In light of this, he believes that Washington (both sides of the aisle, I might add) will step up their game with respect to social media regulation. On the fun side, Bajarin sees that there’ll be no escape for Augmented Reality, that there’ll be laptops available with a 20 hour battery life (yay!), and – the most fun – we’ll see market-ready foldable smartphones and tablets by the end of the year.

I could go on, but I don’t want to spoil all the fun for you. After all, there are millions and millions more articles where these came from.