It seems as if, every time you turn around, there’s something extraordinary happening in the technological and scientific world. In this instance, it was my colleague Matt Cook who turned around and saw an article by Lucy Ingham on Factor-Tech entitled.  “Light Photographed as a Wave and a Particle for the First Time Ever.” 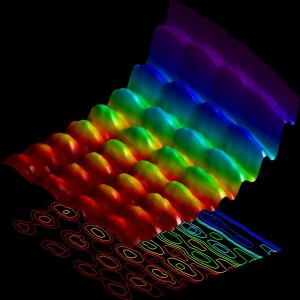 The article calls this a “momentous achievement,” which it sure is, given that scientists had, up to now, only been able to observe one behavior of the other, not both simultaneously.

“The dual behaviour of light, which is demonstrated through quantum mechanics and was first proposed by Albert Einstein, was only possible to capture by scientists at École polytechnique fédérale de Lausanne (EPFL), Switzerland, due to an unorthodox imaging technique.”

“The scientists generated the image with electrons, making use of EPFL’s ultrafast energy-filtered transmission electron microscope. This gave them a rare advantage over other institutions, as EPFL has one of only two such microscopes in the world.”

“The image was achieved first by firing a pulse of laser light at a miniscule metallic nanowire, adding energy to charged particles in the nanowire and making them vibrate.” (Source: Factor-Tech.)

All this, of course, sounds very abstract and out there. As in, what’s this got to do with us:

“’This experiment demonstrates that, for the first time ever, we can film quantum mechanics – and its paradoxical nature – directly,’” said research leader Fabrizio Carbone.

“However, the research could also be important for the future development of quantum-based technology.”

“’Being able to image and control quantum phenomena at the nanometer scale like this opens up a new route towards quantum computing,’” he added.”

Okay, you’re probably still asking what all this has got to do with us. Quantum computing is still pretty new, but as it matures, it will be able to perform computations and analysis far more quickly than anything that traditional computers can do. It will be of special interest in the security world, since it will be able to do crypto-graphic analysis orders of magnitude more rapidly than it’s now done.

So, nothing we have to spend much time thinking about, other than to reflect on how cool it is. And how amazing that it’s taken a 100 or so years after Einstein proposed it for the technology to be in place to actually observe it.

We don’t talk quantum all that often, but we did in a post last November, Schrodinger’s Cat (sort of).