Home / Blog / Robots in the vineyard

Regular blog readers may recall that I have an interest in robotics. Among other posts, last March I wrote about office robots, and in May I had a post about robots that do the milking on dairy farms. So, naturally, I was interested in a recent article in GizMag on machine vision robots designed to keep an eye on a vineyard’s grapes.

Viticulture – I’ll admit, I hadn’t known the word before, and would have thought there’d be an “n” in there (as in vinticulture); guess not – is very labor intensive, and requires those who run them to be continually walking up and down the rows to inspect the vines and the grapes.

Anyway, the VineRobot is being developed by a consortium of partners from wine-growing countries in the European Union:

“The idea is that the solar-powered VineRobot will move autonomously on its four wheels, using RGB stereoscopic machine vision and GPS to navigate its way up and down the rows of the vineyard.”

“Along the way, it will utilize technologies such as chlorophyll-based fluorescence sensing and infrared thermography to non-invasively monitor parameters such as vegetative growth, grape yield, grape composition (from which grape ripeness can be deduced), and soil moisture. That data will be wirelessly transmitted from the robot to a satellite, and from there to an app on the viticulturist’s mobile device.” (Source: GizMag.)

The VineRobot will be faster, cheaper, better than humans, and will also, according to GizMag, be cheaper than doing inspections with drones. 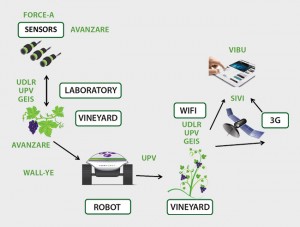 I went over to the VineRobot site to see if I could get more technical detail, but what I found was pretty high level. The visit was, nonetheless, pretty interesting. And I did find this schematic there. (The green lettering represents the different entities that are working on various parts. I thought at first that the object to the right that looks like a bird in flight was supposed to be a bird in flight, which I found a bit puzzling. But then I realized it represents satellite communication. Maybe I need new glasses.)

The prototype, which you can see on the site, looks a bit clunky, but the final design is pretty cool.

We have vineyards in upstate New York, but in our area we have more apple orchards, so I was wondering if there are any robot efforts there. Sure enough, I found an article on Visions Systems Design that’s all about robotic apple picking.

Remember how you used to bring your kids to the orchard to do some apple picking? I guess that someday I’ll be taking the grandkids to watch a robot do it for them.