Even though I live in upstate New York, where there are plenty of dairy farms, I don’t spend a whole lot of time thinking about where the milk on my cereal and the cream in my coffee comes from, other than that it comes from cows. But I do spend a lot of time thinking about technology, and how it’s being used in so many different ways. So I was intrigued by a recent article in The New York Times on robotic milkers.

Now milking machines have been around for over one hundred years, and even the more automated and robotic milkers have been used for a while, but, as technology gets more and more sophisticated, so do those robots.

“Robots allow the cows to set their own hours, lining up for automated milking five or six times a day — turning the predawn and late-afternoon sessions around which dairy farmers long built their lives into a thing of the past.

“With transponders around their necks, the cows get individualized service. Lasers scan and map their underbellies, and a computer charts each animal’s “milking speed,” a critical factor in a 24-hour-a-day operation.

“The robots also monitor the amount and quality of milk produced, the frequency of visits to the machine, how much each cow has eaten, and even the number of steps each cow has taken per day, which can indicate when she is in heat.” (Source: NY Times.) 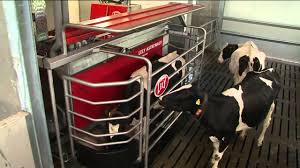 Okay, so maybe that last bit was too much information, but this is a very interesting application of vision systems and other technology.

Anyway, I was interested enough to spend a bit of time grazing (sorry!) around the sites of a couple of the companies that make the robotic milking equipment.

One of the ones I looked at, Lely, has a robotic milker called the Astronaut – can’t imagine where that name came from – and part of their value proposition is that “the cow is key”, and that the Astronaut is “the natural way of milking.” Well, I don’t know exactly how “natural” a robotics milker is ever going to be, but it probably is the future way of milking. By the way, I figured out that they do ARM based processing – what processors they use I couldn’t tell you.

What I can tell you is that those robotic milking machines have come a long way from the 4H kid sitting on stool, milking by hand.