Home / Blog / Halloween: yet another area where technology has made inroads

I am continually amazed by the inroads technology has made into all aspects of our lives. As someone who remembers rolling down a car window, and using a phone that – however long the cord – was tethered to the kitchen wall, I’ve certainly seen a lot of these inroads in my lifetime.

Halloween is one area where technology has definitely encroached, and much of that encroachment has occurred when it comes to decorations.

When I was a kid, Halloween decorating was pretty low key. A carved pumpkin on the doorstep. A scarecrow propped up on the front lawn. Maybe a plastic skeleton hanging in the window.

Halloween décor became more of a “thing” when my now-grown kids were little, but it was still not that big a deal.

Now, of course, electronics have taken over. ZDNet even has a recommended list of animatronics, robots that can put you in the Halloween frame of mind and/or scare the trick-or-treaters who come by your house.

ZDNet gave the best overall Halloween animatronic nod to Wally the Clown. Fear of clowns is pretty widespread. (I’ve seen figures ranging from 10% to 40% of all Americans. I’m guessing that the 40% would include those who, while they may not fear clowns, loathe them.) There’s no clowning around here. Wally is 6 feet tall, his body moves, and he has a repertoire of four scary phrases: 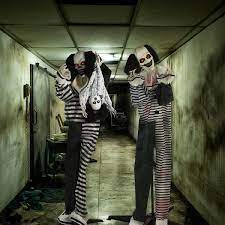 This might be a little too creepy for little ones. Hopefully Wally will only act up/act out for older kids. And grownups.

When I was a kid, a scarecrow was an inert “character”: old clothes stuffed with rags, propped up against a tree or sitting in a porch chair. Not really all that scary. But the animatronic Sitting Scarecrow – ZDNet’s #1 for best porch item – is plenty scary. It “looks up quickly and cackles when someone reaches into the [candy] bowl.” Props to the kids wiling to grab a treat from that bowl.

Then there’s the Gargoyle Skull Candelabra, a not particularly scary indoor decoration. It does float around, flickering and making spooky sounds as it goes. It deploys old school “bump and go” technology, so that when it runs into a wall it starts moving in another direction. I wouldn’t recommend this one if you’ve got pets.

ZDNet also likes the life-sized animatronic Talking Witch. She’s not all that scary looking – nowhere near as scary as Wally the Clown – and her phrases – “Eeeheheehe, beware!”…”You’re not really scared, are you?”…”I would go back if I were you!” – are pretty tame compared to Wally’s. But her voice is creepy.

Not that I’m going to run out and get one, but I liked the animatronic Fortune Teller. It’s a lot smaller than Wally or the Witch, and she gives out funny fortunes such as “My advice to you is… if you’re too open-minded, your brain may fall out!”

I might consider playing around with adding some creepy sounds to my doorbell, but I’ll be steering clear of the pricey animatronics. Mostly, I think I’ll stick with just figuring out what sorts of candy to give out, and how many pieces I need (making sure the amount includes plenty of leftovers for snacking). No technology needed there!