Home / Blog / The Show’s Going on – with Holographic Animals!

The use of wild animals has long been controversial, with many reports over the years of pretty horrifying cruelty. Under pressure from activists like PETA (People for the Ethical Treatment of Animals), in 2015 Ringling Brothers and Barnum & Bailey began phasing out the use of elephants. Pressure continued on them to stop using lions, tigers, and other wild animals as well. Ringling Brothers folded its tent in 2017, but it’s coming back next year. And when it does, “the greatest show on earth” will be animal-free.

The absence of animal acts is probably a good thing. A number of states prohibit the use of wild or exotic animals in circuses. (The Big Apple Circus has always featured dogs, horses, and ponies instead. Cirque du Soleil has always been animal-free. The only animals are puppets.)

As German newspaper the Rheinische Post reports, Circus Roncalli was founded in 1976 and began phasing out animal performances in the 1990s. Since 2018, the show has featured no live animals, turning instead to holographic projections with 360-degree visibility for spectators seated around the ring. According to the BBC, it takes 11 projectors to pull off the feat. 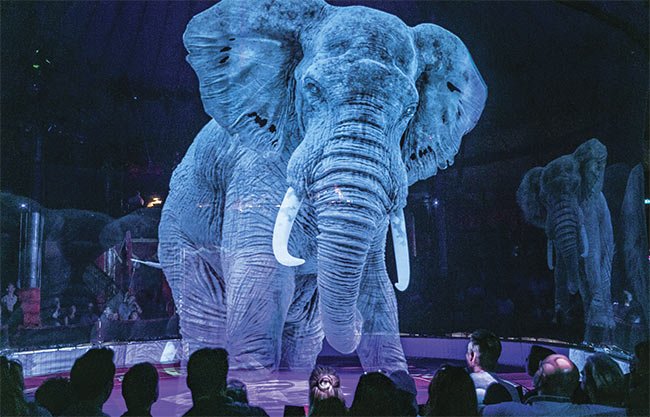 Some of the holographic acts replicate traditional circus fare, like the performing elephant and an ethereal ring of horses that gallops around the big top. Other acts are more fantastical; circus-goers of the past, for instance, would not have been treated to the sight of a huge goldfish hovering in the middle of the ring. (Source: Smithsonian Magazine)

The use of holographic animals instead of the real thing brings with it a number of benefits. First and most obviously, it guarantees that no animals will be mistreated. But the holograms are also cheaper to maintain and transport.

Given the quality of the technology, and the fact that people have grown accustomed to – and expect – technology in all aspects of their life, I’m guessing that there are plenty of circus goers who prefer the experience. It’s still fascinating, but without the cruelty and the smells. Bonus that you can also see things like a giant goldfish, which is something that never could have happened in real life.

In case you’re wondering how the Circus Roncalli holograms work:

According to Dan Novy of MIT’s Media Lab, [Circus Roncalli’s founder and director, Bernhard] Paul’s animals are projections that rely on a material called scrims. Scrims create a floating 2D illusion via projectors and semitransparent, loose-weave material. The projections lack two distinguishing factors of true holograms: parallax and accommodation. While the light-based simulacrums capture the look of the animals, an accurate description lies in the uncanny valley between science and consumerism. Source: Photonics)

The Photonics article also gives a bit of a mini history on how holograms came about, going way back in time to Pythagoras, and ends on this note:

Daniel Smalley, a Brigham Young University professor of electrical and computer engineering who uses lasers to create 3D volumetric images, said it isn’t important whether the circus uses real holograms, projections, or even Pepper’s ghost, the optical illusion popularized by John Henry Pepper. The projected images are mesmerizing, and they are a move forward in the elimination of animal cruelty in circus acts.

I’ll bet those holographic animals are mesmerizing. Good to see that the show’s going on with them.