It’s a bit before my time, but there’s a classic sci-fi film, Fantastic Voyage. The plot revolves around the miniaturization of a submarine and a medical team that fantastically voyages into the body of a famous scientist in order to repair a blood clot in his brain. And, of course, it’s a race against time, as the miniaturization only lasts for an hour… 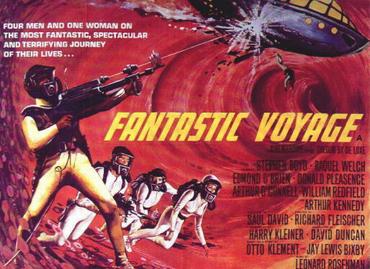 Well, we’re not quite there yet in real life, but there’s plenty of promising robotic technology that will be able to do the same sorts of tricks, without worrying about whether a doctor and submarine are going to revert to full size before they can complete their task.

One of the emerging technologies is magnetic slime.

Magnetic slime may sound like something your kids clamor for, but magnetic miniatured “soft-bodied” robots based on silicone or fluids (ferrorfluid or liquid metal) can be used for applications like minimally-invasive surgery and targeted drug delivery. But they have their limitations when it comes to navigating highly-restrictive environments. Now scientists from Chinese University of Hong Kong are developing a larger, and more highly configurable and adaptable magnetic slime, which can change the robot’s shape on the fly.

The slime is a mixture of neodymium magnet particles, borax and polyvinyl alcohol. The result is a dark brown blob that responds well to a magnetic field. Using that field, engineers were able to configure the robot into a torus, a half-torus, a pancake, a sphere and a straight line. They demonstrated in a YouTube video configuration that could be used to manipulate objects. The half-torus, for example, could be used to corral one or more objects and push them in a desired direction. And they cleverly used the pancake shape to bind two pieces of wire together by rolling them into the robot body. They note that a similar technique could be used to envelop an object to be moved to a desired location. (Source: Techxplore)

An out-of-body application is interconnecting electrodes, as the slime has good electrical conductivity properties. In the medical world, one of the main applications for this technology is retrieving objects that were accidentally swallowed. (Anyone who ever had a kid or a dog will appreciate this capability.)

To see the new magnetic slime in action – making a connection and scooping up a foreign object – check out this video. Weird, but fascinating, that’s for sure.

Unfortunately, the slime is toxic, which means we’re a while away from injecting it in the human body. The workaround for this so far is adding a silica coating, but the coating only lasts for a short time. Which sounds like the miniaturization in Fantastic Voyage. Truth may not be stranger than science fiction, but it sure is equally strange.