Home / Blog / Nanotech in healthcare. (And no, I don’t want to live forever.)

I’m old enough to remember when the latest and greatest computing technology was – well, there’s really no other word for it – clunky. Oh, maybe not computers as big as a barn that couldn’t do all that much, but so-called portables that weighed a ton (or seemed like it, if you were lugging one); paper-based terminals that connected to mainframes at speeds that rivaled the Pony Express; and floppy disks that actually were floppy. So I’m continually marveling at how things have gotten more compact (not to mention faster and higher performing). When I stop to consider what we’re now able to pack onto a board and compare it to just a few years back, I sometimes shake my head in wonderment.

And when I think about nanotech – matter used on an atomic, molecular, and supramolecular scale – I’m in total awe.

How small is small? A device working on the nanoscale can be “up to 100,000 times smaller than the width of a human hair.” Now, I’m not about to pull out one of my remaining human hairs to see if I can gauge the magnitude, but let’s just say that this is astonishingly small.

One such material composed of carbon atoms is 100 times stronger than steel but six times lighter. Other metamaterials, such as quantum dots, can produce far more power than conventional solar or electrical cells despite being zero-dimensional. (Source: ZME Science)

In the piece cited here, medical writer Michelle Peterson provides a detailed look at nanorobotics – and how they’ll be used in the not-so-distant future in healthcare.

After identifying four types of nanorobotics – too complex to get into here, but worth the read if you’re interested – Peterson gets into the applications. Although there are many potential use cases (military, industrial, environmental) for nanorobotics, the principal focus to date has been in the health industry. 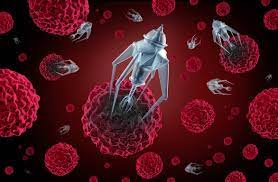 Regarding medical applications, functions such as healing wounds, atomic-scale surgical equipment, and traversing through the body to find and treat ailments are most commonly theorized.

For cancer treatment, it’s anticipated that we may be on our way to being able to detect cancer “on a single-cell level.” With health-sensing technology, biopsies – painful and invasive – may become a thing of the past. And treatments can be targeted to specific cells, not the shotgun approach that most chemotherapy still relies on.

What else might nanorobotics be used for. For one, healing wounds by stopping bleeding and regenerating tissue. Someday, perhaps tackling dementia. Nanotechnology will increasingly be used in surgery. “Nanodevices that can traverse the blood-brain barrier, [will bypass] the need for clumsy electrodes or invasive brain surgery.” Then there’s improved ability to control bionic limbs.

Futurist Ray Kurzweil believes that nanotechnology will someday outsmart death and let people live forever. (I don’t know about that. Lots to think about the ethical implications of deciding who gets to be immortal, and what resources they’ll consume at the expense of new generations.)

None of this is happening immediately. As Peterson points out:

…nature is a highly evolved system developed over billions of years, making the synthesis of unnatural nanoscale devices painfully slow and difficult.

Still, it’s worth keeping an eye on emerging nanotech as it takes on so many seemingly insurmountable health problems. And we know for one thing, it won’t be clunky at all!