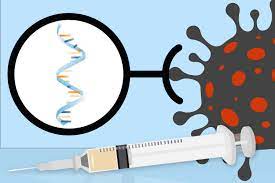 Each year, the MIT Technology Review publishes a list of the most important technologies on the scene. This year, they lead off with what, by anyone’s reckoning, has to be THE technology of the year, if not the decade: Messenger RNA. This technology has been under development for 20 years, but had not been used in any drug on the market – until last year, when both Moderna and Pfizer used mRNA to jumpstart development of coronavirus vaccines. Unlike vaccines that use a weakened version of germ to set off an immune response, mRNA-based vaccines “teach” cells how to create a protein that will trigger immunity.

Beyond potentially ending the pandemic, the vaccine breakthrough is showing how messenger RNA may offer a new approach to building drugs.

In the near future, researchers believe, shots that deliver temporary instructions into cells could lead to vaccines against herpes and malaria, better flu vaccines, and, if the covid-19 germ keeps mutating, updated coronavirus vaccinations, too.

But researchers also see a future well beyond vaccines. They think the technology will permit cheap gene fixes for cancer, sickle-cell disease, and maybe even HIV.

After a year now of life on semi-hold for so many of us, a year that’s seen so much illness and death, it would be enough if “all” that mRNA did was help end the pandemic. That it holds so much promise to take on so many other illnesses is definitely a bonus.

This blog post was NOT written using GPT-3, the natural language computer model that’s been producing the written word that, to date, is the closest to what an actual human could do. “Trained on the text of thousands of books and most of the internet, GPT-3 can mimic human-written text with uncanny – and at times bizarre realism, making it the most impressive language model yet produced using machine learning.”

That’s the good news, I guess. The not so good news? The realistic-sounding text produced may be pure nonsense, or it may be out and out misinformation. And if there’s one thing we don’t need out there, it’s more misinformation. Another downside is the tremendous amount of computational power it consumes. So far, the human writer has a far smaller carbon footprint. Still, we can certainly expect that this technology will continue to be perfected, and that chatbots will be getting more authentically chattier.

Most of us have an awful lot of personal data out there. We do a lot of shopping on Amazon. We bank online. We’re on social media. We take those online quizzes to see what Harry Potter character we’re most like. (Some of us do, anyway: not me!) We do Yelp reviews. We spit and swab so that we can find out what village in Italy our great-grandparents hailed from. And whether “our information has been leaked, hacked, [or] sold and resold”, who knows what organizations are using that data, and for what purposes.

Data trusts offer one alternative approach that some governments are starting to explore. A data trust is a legal entity that collects and manages people’s personal data on their behalf. Though the structure and function of these trusts are still being defined, and many questions remain, data trusts are notable for offering a potential solution to long-standing problems in privacy and security.

Electric or other alternative fuel vehicles are certainly the automotive future, but for now, for all the hype, they’re not for everyone. The lithium-ion batteries that run e-vehicles are just too problematic. They’re costly, have relatively limited range, and plug-in “refueling” is a) not as available as gas stations; and b) takes too long when compared to the quick convenience of pulling up to a pump and filling ‘er up. Lithium-metal batteries may be the answer. A company called QuantumScape says that its battery “could boost the range of an EV by 80% and can be rapidly recharged.” They’re still a way off from ready for prime time, but QuantumScape has inked a deal with Volkswagen, and hopes to be selling EV uses this new technology by 2025. So not that far off.

Digital contact tracing was a breakthrough technology that, frankly, hasn’t panned out all that well in terms of helping halt covid’s spread, even though a number of companies were out the gate with applications early on during the pandemic. The reasons had less to do with the technology than with messaging, adoption, privacy concerns, and other issues that had nothing to do with whether Bluetooth could ping nearby phones. We’ll have to keep this in mind if and when the next pandemic rears its ugly head. Technology on its own isn’t going to be the answer.

That’s it for the first five breakthrough technologies. Next time, we’ll take a look at the other five technologies that the Tech Review has on their list.