Home / Blog / What I missed at CES this year

A couple of weeks ago, CES2021 was held. This is the mega consumer electronics show (that’s where the CES comes from) held annually in Las Vegas. It’s attended by 100,000 folks, and the exhibits stretch across millions of square feet. This year, CES was held virtually.

Not that I would have attended in any other way. This is a consumer-oriented show, and Critical Link’s work is on the scientific/industrial side of the application spectrum. Still, I’m a tech guy, and a gadget guy, so I’m always eager to browse the reporting to see what I’m missing by not being there.

There was, of course, the usual amount of gimmickry. Last year’s smarter toilet was joined by an even smarter bathtub. And something called a smart lipstick, which lets the user create their own personal color blend. It will retail for about $300, and my wife is definitely not interested.

A few things did catch both my eye and my interest.

The sleek, electric vertical take-off and landing aircraft would be GM’s first foray into aerial mobility, and the company says this four-rotor aircraft is powered by a 90-kWh EV motor at speeds of up to 56 mph. Beyond that, details are scarce  — GM stopped short of offering more technical details, let alone 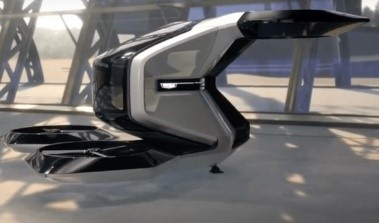 committing to production or detailing a time frame in which we can expect to see these eVTOLs, as they’re known, in the air. Based on the images, this looks like a single-seat drone, presumably for short urban hops executed autonomously. (Source: CNET.)

A little more down to earth is the ColdSnap from Sigma Phase, which promises to be the Keurig of ice cream makers. Like Keurig, it makes a single serving, only instead of coffee, it dispenses a cup of ice cream, or a frozen margarita. Unlike Keurig, which you can get a K-Cup for for about fifty cents, the pods are projected to cost $2.50 – $3.00 when the ColdSnap is available next year. The device uses a souped-up version of the same compressor/condenser technology used in fridges and freezers.

The company says the machine simultaneously pulls heat from the pod, creating a cooling effect on the liquid ice cream mix, and engages a part within the pod that churns the ingredients during the cooling process. Air is sucked into the can to make the required loft in the ice cream. (Source: CNN)

The machine will cost about $500, and is a heavy-weight appliance by countertop standards, weighing in at 50 pounds. But the weight trade-off makes it possible for the ColdSnap to produce a cup of ice cream in 60-90 seconds.

LG showed off the LG Rollable, an expandable smartphone, which it expects to release this year. A cooler variant (cooler to me, at any rate) on the foldable phone. Foldables were introduced a couple of years ago, with great fanfare, but they took a while to perfect. The ones on the market now are pretty reliable. But the foldables just seem like a more conventional technology than the rollables, i.e., nothing that we haven’t seen before in a similar form factor. The rollables, on the other hand, have an expanding and contracting screen. Way cool. The downside, apparently, is that the screens are somewhat fragile and, unlike the foldables, which fold in to protect the screen, the rollable screen is unprotected. So users need to be ultra-careful. This will all get worked out, and this is one technology I’ll be keeping my eye on. Much as I like ice cream, I’d rather have a rollable phone than a Keurig-style ice cream maker. (And, realistically, I know I won’t ever get my hands on a personal air taxi.)

As always, seeing what’s up at CES was great fun. Even though I won’t be there, I really do hope that when 2022 rolls around, they’ll be able to convene for real. When it comes to technology, there’s really nothing like hands on!