The NHL season kicks off today, a few months later than normal. But, COVID…

Hockey, like most other sports, has been introducing increasingly sophisticated tracking technology for a number of years now, and there’ve been pucks in play with some level of “intelligence” since the mid 1990’s. But this year, when the puck drops, that puck will be smarter than ever, and a lot smarter than one might expect from a six-ounce hunk of vulcanized rubber. 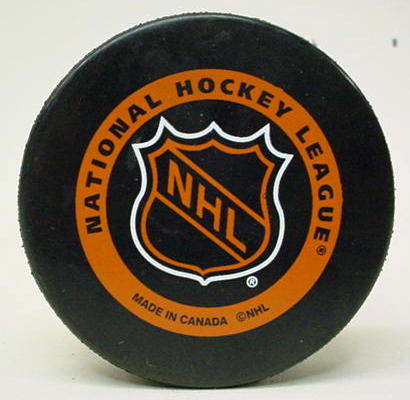 The new pucks have a small embedded battery, a circuit board, and infrared light tubes that shoot out 60 pulses per second.

The key tech element of the new puck is its battery-powered infrared light, the beam essential to a triangulation system that also incorporates 16-18 cameras mounted inside every arena. Every NHLer also will be outfitted with an infrared tag — approximately the size and shape of a pack of gum — slipped into the backs of their sweaters.

All the light beams and all the associated PPT technology, other than cameras mounted in the ceiling and elsewhere in the arena, will not be visible. Every move of puck and players will be tracked, recorded, and all of the info streamed into a giant data punch bowl. (Source: Boston Globe)

Getting technology to work in a hockey puck is no small feat. First, there’s the cold to contend with. Pucks are chilled before they’re put in play, and then they’re being zipped around on ice. That’s cold. And cold isn’t generally all that kind to electronics. Then there’s the fact that the puck is being slapped around full force by professional athletes, armed with sticks and moving pretty darned fast on their skates. Sometimes the puck is propelled into the boards.

So the new pucks had to be put through some very rigorous testing.

In addition to the physical testing to make sure that the technology could stand up to the elements the pucks would be facing, the NHL also had to make sure the puck feels right to the hockey players. Because if there’s one thing that most high-level athletes come equipped with is pretty sophisticated human-based sensors that can tell if something feels “off.” Once the players couldn’t tell the difference between the smart puck and the not-so-smart pucks they were used to, the newbies got the go ahead.

The tracking technology (from a North Carolina company called SMT):

This will allow broadcasters to go to town with graphics, provide analysts with a greater ability to figure out what’s going on, help (maybe) improve player performance, and presumably enhance the fan experience. Capturing all this information will also give gamblers more and more crazy little stats to bet on in real-time. Not necessarily a change for the better, but it’s inevitable.

The pucks aren’t cheap to produce: $40 per puck. But fans will still be able to keep any stray puck that ends up in the stands (sometimes in the side of some poor fan’s head or splashing down in a cup of beer). The tracking system will be deactivated once it’s out of play, but how much fun would it be trying to use it as a subject for a Tear Down Tuesday? I don’t know if you could get through the vulcanized rubber very easily. It would probably take the level of care and precision we see when anthropologists unearth a bone or piece of an artifact in an excavation site. Still, I wouldn’t mind getting my hands on those embedded innards to see what’s going on!