I have a long-standing fascination with 3D printing. It’s such an interesting technology, and has been put to so many good uses. It’s great for product prototyping and manufacture. It has many medical applications, from prosthetics to some recent work where it was deployed to create much-needed parts for ventilators used for COVID patients. Musical instruments and jewelry can be crafted with 3D printers. They’re also being used to print food, like meat substitutes. (Don’t know if I’m quite ready for that.) Not to mention firearms, which may not be such a good thing if the printers get into the wrong hands.

Increasingly, 3D printing is being used to build houses. More on that in a bit, but I thought it might be useful to do a quick primer on 3D printing. So here I’ll borrow from an excellent overview I found on Interesting Engineering.

3D printing is part of a family of manufacturing technology called additive manufacturing. This describes the creation of an object by adding material to the object layer by layer.

The first step in the process is the creation of a model, which is typically designed using CAD software. Once the design is complete, the model needs to be digitally sliced, i.e., the model is broken down into the layers, and the data on each layer sent to the printer, which then starts working its magic.

It will begin to print out the model according to the specific instructions of the slicer program using different methods, depending on the type of printer used. For example, direct 3D printing uses technology similar to inkjet technology, in which nozzles move back and forth, and up and down, dispensing a thick waxes or plastic polymers, which solidify to form each new cross-section of the 3D object. Multi-jet modeling uses dozens of jets working simultaneously, for more rapid modeling.

In binder 3D printing, the inkjet nozzles apply a fine dry powder and a liquid glue, or binder, that come together to form each printed layer. Binder printers make two passes to form each layer. The first pass deposits a thin coating of the powder, and the second pass uses the nozzles to apply the binder.

In photopolymerization, drops of a liquid plastic are exposed to a laser beam of ultraviolet light, which converts the liquid into a solid.

Sintering is another 3D printing technology that involves melting and fusing particles together to print each successive layer. The related selective laser sintering relies on a laser to melt a flame-retardant plastic powder, which then solidifies to form the printed layer. Sintering can also be used to build metal objects.

Back to 3D printing in construction.

This isn’t anything new-new. Its antecedent – construction using prefabricated components – has been around for decades. And 3D printing has been around for years. But 3D houses are now being regularly constructed. (If you have a few minutes to spare, google “video of 3D printed house” and be prepared to be amazed.)

3D printing in construction is used in a number of different ways. These include extruding the building materials (concrete, wax, foam, polymers…), powder bonding and welding. The benefits are many: time to build is decreased, as are labor costs. And the houses are pretty rugged, built to last an estimated 50-60 years. With so many areas experiencing an affordable housing shortage, the 3D construction approach is poised to take off. (There are estimates that the cost of building a 3D printed house is nearly half than that of a conventionally-built home.) With 3D printing, there’s less construction materials waste, and less construction-vehicle pollution.

Many of the 3D printed houses are back yarders, built for use as a home office or guest house. In Mexico, an entire community of small 3D printed houses is going up to alleviate their housing shortage. Such houses can be built pretty quickly, so they’ll be a natural for recovery from natural disasters – definitely an improvement over a FEMA trailer. Increasingly, larger houses will be built this way as well.

And if you’re wondering what a 3D printed house can look like. Well, here’s one from Mighty Buildings. If you like modern, I’d say they can look pretty sharp: 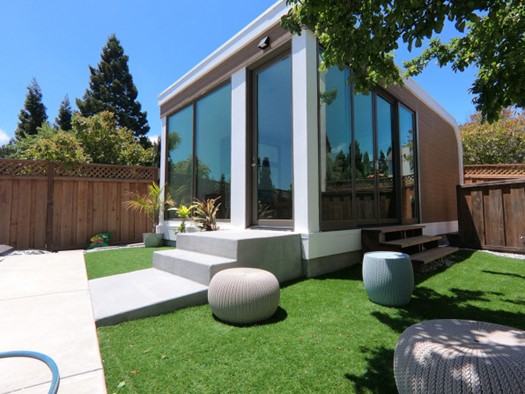