Somewhat lost in all the pandemic and political news is NASA’s launch of the Mars 2020 Perseverance rover (nickname: Percy), which on July 30th headed off on its seven-month trip to the Red Planet, where it will join Curiosity, which touched down in August 2012 and is still active. (The earlier rovers – Sojourner (1997) and Spirit and Opportunity (2004) – are no longer operational.) 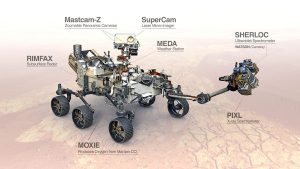 As you can see, it’s full loaded with “state-of-the-art tools for acquiring information about Martian geology, atmosphere, environmental conditions, and potential biosignatures.”

Mastcam-Z is the camera system mounted on the mast. It’s got panoramic and stereoscopic imaging capabilities that are deployed to take high speed 3D pictures and videos of objects. It has a zoom function that lets it take a look at objects at a distance. Mastcam-Z is on the lookout for objects of interest, rocks and soil that the earthbound scientists can choose to grab and (once back on earth) examine for signs of life. Mastcam-Z will also be used to look for evidence of earlier water-related features (lakes, streams) that might have supported life.

MEDA (Mars Environmental Dynamics Analyzer) is “a set of sensors that will provide measurements of temperature, wind speed and direction, pressure, relative humidity and dust size and shape. Its role is to check out the weather conditions that will let future human Mars travelers know what to expect.

MOXIE (Mars Oxygen In-Situ Resource Utilization Experiment) is what will enable Mars explorers to convert Martian carbon dioxide – which accounts for approximately 96% of the gas in Mars’ atmosphere –  to oxygen that they can use to breathe, and to propel the Martian vehicle off of Mars so that those first explorers can get back home safely. “MOXIE makes oxygen like a tree does. It inhales carbon dioxide and exhales oxygen.” Nice image!

PIXL (Planetary Instrument for X-ray Lithochemistry) is used “to measure the chemical makeup of rocks at a very fine scale,” and determine whether there are any signs of earlier microbial life. It also contains a camera capable of taking really close-up close-ups. It can really do some very fine-grained work. “PIXL detects over 20 chemical “fingerprints” – even when the amount is only a few parts per million. It finds the exact tiny spot in a rock where each chemical is.”

RIMFAX (Radar Imager for Mars’ Subsurface Experiment) is “ground-penetrating radar that will provide centimeter-scale resolution of the geologic structure of the subsurface,” which will make Percy the first of the rovers to let scientists see what lies beneath. It’s designed to “detect ice, water or salty brines more than 30 feet (10 meters) beneath the surface of Mars.”

SHERLOC (Scanning Habitable Environments with Raman & Luminescence for Organics and Chemicals) is another first for Mars: the first UV Raman spectrometer to land there. It will be used for “fine-scale detection of minerals, organic molecules and potential biosignatures.” Just like Sherlock Holmes did, its namesake SHERLOC uses a magnifying glass to check out fine details. It will carry with it spacesuit material to help determine how it will withstand the Martian environment. (And I thought Syracuse winters are bad…)

SuperCam “is a remote-sensing instrument…that uses remote optical measurements and laser spectroscopy to determine fine-scale mineralogy, chemistry, and atomic and molecular composition of samples encountered on Mars.” It includes a laser that can clear away dust so that the other instruments can get a better view of an object. It also measures dust hazards so that humans on Mars will know whether they contain elements that might do them some harm.

I’ll be keeping my eye on Percy, and look forward to next year when it starts reporting back from Mars. Safe journey!