I’m always bookmarking articles of interest, and in going through my backlog, I just came across one on underwater energy harvesting that appeared in EETimes this past February. (And speaking of February, doesn’t that seem a million years ago?)

In the article, Bill Schweber describes a new approach that some MIT researchers are using.

The team combined two very different phenomena — the piezoelectric effect and backscattering — to provide a modest data-rate, battery-free underwater sensor and data link, which they call a Piezo-Acoustic Backscatter (PAB) system. Backscatter itself is a well-known technique often used with passive RFID and other systems; it uses directed, impinging energy to stimulate, power, and provide a response, usually in the electromagnetic RF world. (Source: EE Times)

As Bill points out, the idea of energy harvesting – tapping sources of energy like wind, solar, underwater currents, and sea water – is inherently appealing. The sources are free for the asking, and, unlike oil and other extractive energy sources, are renewable. But the cost of developing free sources is high, which is why the work being done by the MIT team and others to make energy harvesting more feasible is so crucial – even if the MIT work is not aimed at providing energy at scale to fuel the grid.

The applications for this project are largely around oceanography: sea temperature monitoring to track climate change and marine life movement. The solution being developed by MIT researchers will allow scientists to deploy large networks of sensors that can operate for prolonged periods without human intervention. These networks of sensors, something of an IOT that runs underwater, gather data and transmit it to devices on the surface.

Here’s how it works:

In the MIT team’s PAB system, a transmitter sends directed acoustic (pressure) waves through water toward a submerged piezoelectric sensor and circuit that has stored the sensed data — which could be water temperature, flow, salinity, or other parameter of interest. This submerged node has a circuit board that houses a piezoelectric resonator, an energy-harvesting unit, and a microcontroller. When this energy wave hits the sensor, the piezo material vibrates and stores the resulting electrical charge — that’s the beginning of the energy-harvest cycle. Next, the sensor uses that stored energy to reflect or to not reflect a wave back to a receiver. The receiver sees a reflection as a 1 and a non-reflection as a 0 — and can so decode the serial data stream.

“Once you have a way to transmit 1s and 0s, you can send any information,” said co-author Fadel Adib, an assistant professor in the MIT media lab and the department of electrical engineering and computer science and founding director of the Signal Kinetics Research Group. “Basically, we can communicate with underwater sensors based solely on the incoming sound signals whose energy we are harvesting.”

So far the MIT research has been done in the lab, not in the ocean. 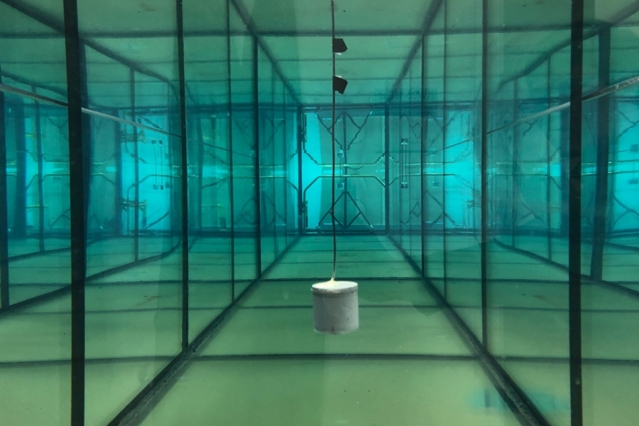 (That’s a picture of the tank used for the experiments.) The next step is to test in real-world conditions, where water salinity and wave movements will vary.

Overall, an interesting story that I’m glad I took off the virtual shelf of my backlogged, bookmarked library.