Home / Blog / Lots of technology behind the moon landing 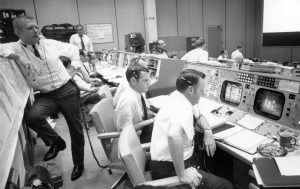 With the celebration of July’s 50th anniversary of the moon landing, I’ve been reading a lot about Apollo 11, especially the technology involved in it all. What’s most interesting is how primitive by current standards the technology that got astronauts Neil Armstrong, Buzz Aldrin, and Michael Collins to the moon, and Armstrong and Aldrin onto it.  And the fact that so much of that technology had to be built from scratch.

Obviously, there was something to go on. Rockets in the United States had been in serious development since World War II. (Or since the 1920’s, if you count the foundational work of Dr. Robert Goddard, who launched the first liquid fuel rocket in Worcester, Massachusetts, in 1926.) And both the Soviet and American space programs had been putting men into space since 1961.

…but getting a rocket powerful enough to not only escape Earth’s gravity, but also to propel a spacecraft more than 384,000 kilometres, was going to require some innovative thinking. 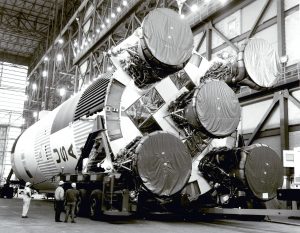 “The truly amazing thing is that nothing existed. Every single thing had to be built from scratch and to spec,” said Erin Gregory, assistant curator at the Canada Aviation and Space Museum. “The Saturn V rocket is one of the most underappreciated aspects — I think — of the Apollo program, in the amount of time and effort that had to go into creating this mammoth rocket.”

While the rocket required to launch two astronauts into orbit around Earth in the Gemini program — which ran from 1961 to 1966 — used roughly 500,000 pounds of thrust, the Saturn V [used for the Apollo 11 moon landing] would require much, much more than that: 7.5 million pounds. (Source: Canadian Broadcast Company)

The computing power in the Saturn V wasn’t much – a fraction of what we’re all carrying around in our smartphones. And that computing power (and the computing power on the ground – remember those giant, room-filling/building-filling computers?) needed to be a lot more robust than what had been needed to orbit around the earth. But “software was in its infancy, as were semi-conductors and computer chips which, until Apollo, didn’t have much of a market.”

One bit of the moon landing technology I wasn’t familiar with was the memory. Chris Gainor, an Apollo historian, had this to say about how “memory was put into the Apollo computers”:

“The hardwired memory had to be established well in advance of the flight, because they had these large groups of women who had to knit. They had to literally knit these wires together in certain ways.” 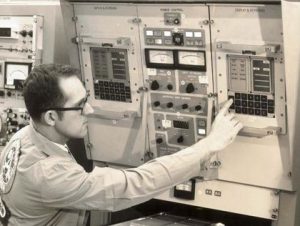 The lunar module itself required technology beyond what had been used in the earlier space modules. Those modules just had to get the astronauts back to earth. Apollo 11 needed a separate module to get Armstrong and Aldrin onto the surface of the moon and back to the command module helmed by Collins. So, a lot more computing power.

I also saw an article by Cliff Saran in Computer Weekly that had additional lowdown on the Apollo 11 technology.

The so-called Apollo Guidance Computer (AGC) used a real time operating system, which enabled astronauts to enter simple commands by typing in pairs of nouns and verbs, to control the spacecraft. It was more basic than the electronics in modern toasters that have computer-controlled stop/start/defrost buttons. It had approximately 64Kbyte of memory and operated at 0.043MHz.

Just think of this next time you pop an English muffin in your toaster!

The astronauts could program the hardware using “a small set of machine code instructions.”

The AGC program, called Luminary, was coded in a language called Mac, (MIT Algebraic Compiler), which was then converted by hand into assembler language that the computer could understand. The assembler code was fed into the AGC using punch cards.

Amazingly, the code listing for the AGC program can be downloaded as a PDF file. There is also an equivalent program for the lunar lander.

The AGC was designed to be fault-tolerant and was able to run several sub programs in priority order. Each of these sub programs was given a time slot to use the computer’s sparse resources. During the mission the AGC became overloaded and issued a “1202” alarm code. 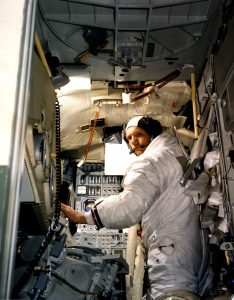 Just seconds prior to the moon landing, Neil Armstrong alerted Mission Control to that error but was assured that he could ignore it. (Good to know that some things haven’t changed over the decades.)

Experts cite the AGC as fundamental to the evolution of the integrated circuit. It is regarded as the first embedded computer.

Those early astronauts were all “fly boys” – pilots whose preference would have been to control their “ship” manually, but the precision required for the moon mission required a level of precision that only the use of a computer. Fortunately, those “fly boys” were also engineers!

On the ground, the computers were provided by IBM – their mainframe workhorses System/360 Model 75s. One of these System/360’s:

…was used by Neil Armstrong and Buzz Aldrin to calculate lift-off data required to launch the Lunar Module off the Moon’s surface and enable it to rendezvous with Command Module pilot Michael Collins for the flight back to Earth.

At the time, IBM described the 6Mbyte programs it developed, to monitor the spacecrafts’ environmental and astronauts’ biomedical data, as the most complex software ever written. 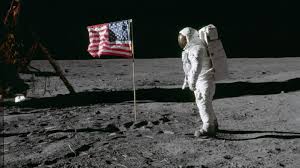 That was then and this is now, and we all have “man on the moon” technology in our pockets and on our desks.  And a lot of it started with the “scratch” technology used for Apollo 11. Just imagine what they’ll be coming up with for a human mission to Mars, which NASA is planning by 2033.