Home / Blog / How smart is your city?

One of the most interesting and rapidly growing application areas for the Internet of Things (IoT) is the development of smart cities. Smart cities use sensors to collect data, and then use that data to make sure that their resources – lighting, power, traffic control, policing, etc. – are optimally deployed. Smart cities promise to increase efficiency, decrease costs, and improve urban quality of life. It’s also an area where we’re increasingly seeing Critical Link sensor technology being used.

Anyway, in my (reading) travels, I’ve been coming across more articles on smart cities, like the one from phys.org that focused on cities that are using smart technology “to tackle mundane but serious issues such as improving poor quality housing, safeguarding local food supplies and transitioning to renewable energy.” These aren’t the projects of a sci-fi imagination in which we’re all going to live like the Jetsons. Instead, they deal with nuts and bolts issue. Like the project in Mansfield England where the University of Nottingham is “planning to launch a ‘deep farm’ that could produce ten times as much food as farms above ground.”

In Ireland, the Technological University of Dublin and the Dublin City Council collaborated on developing a new campus in one of the city’s poorer districts. The campus uses renewable energy technology, storing it one site and sharing excess power onto the grid. One of the design goals was tightly integrated the university and the surrounding community, which includes non-technology-driven – but plenty smart – practices like enabling community members to eat side by side with students in the university canteen.

This article led me to another one, also on phys.org, in which the University of Glasgow revealed the results of its global study on smart cities. After sorting through a list of 5,550 cities worldwide with 100,000 inhabitants or more, they identified 27 cities as the world’s leading smart cities. London, Singapore, Barcelona, and Amsterdam led the pack, largely composed of major global cities. Boston was the first American city on the list, ranking fifth, followed by New York. Other U.S. cities on the list: Chicago, Los Angeles, San Jose, and Portland. Toronto and Vancouver were the other North American cities that made the cut.

… found that the vast majority of those who made it on to the rankings table were predominantly capital cities or cities listed as “world cities.” As such, the findings reveal that ‘smart city’ development is closely linked to a city’s global outreach and engagement.

And the research also showed that the majority of the 27 who made the rankings had already garnered a global reputation as “standard bearers of smart city innovation.”

This, of course, got me wondering just how Critical Link (and my) hometown of Syracuse stacks up. Pretty well, as it turns out!

Last winter, Syracuse was awarded a grant that will result in its serving as the state’s flagship smart city when it comes to power.

A network of intelligent streetlights in Syracuse, N.Y. will help the city advance sustainability efforts, while providing a foundation for a wider deployment of ongoing smart city projects.

The upstate New York city will soon begin phasing out its 17,500 conventional streetlights for LED models, capable of communicating across a network, allowing for a more efficient control over the lights, as well as providing feedback related to operations or maintenance issues

In time, the streetlights will support more than just illumination. Like many cities, Syracuse plans to use the poles to deploy other sensors and systems with an ability to collect, process and transmit data from the streets back to city hall. The sensors can be used to count objects like cars and pedestrians. (Source: )

The data Syracuse will be looking at via sensors mounted on their new LED streetlights: “traffic counts, climate, air quality and other measures.” 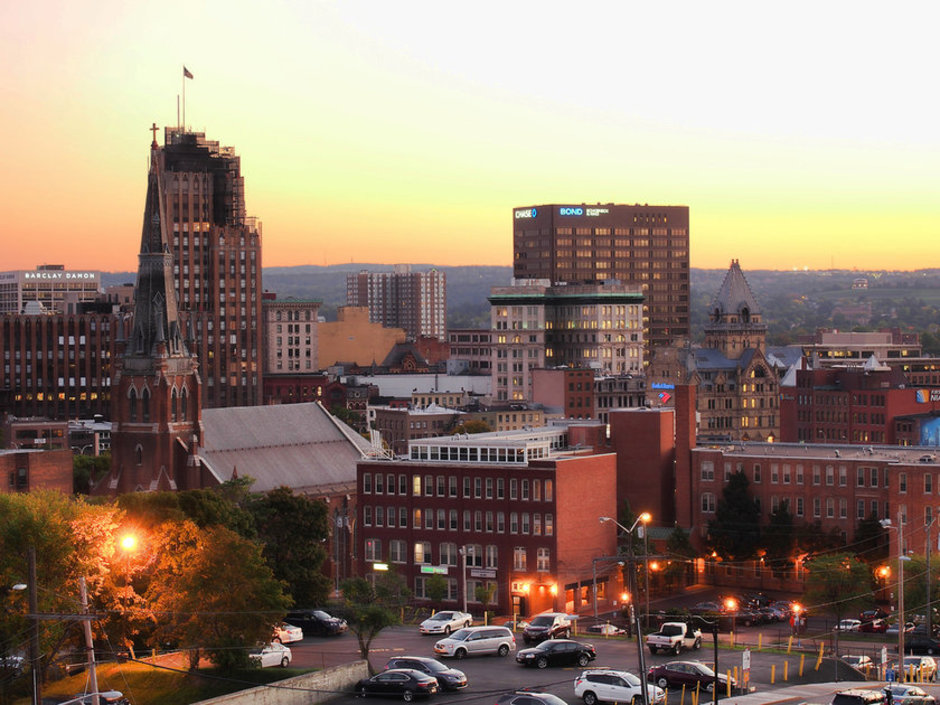 All part of the Syracuse Surge, an initiative aimed at making sure our city thrives in the new, smart economy.

Overall, it looks like we stack up pretty well, even if Syracuse didn’t make the cut of the top 27 smartest cities in the world.

So, how smart is your city?