I’ve had an interest in robotics, dating back to my grad s 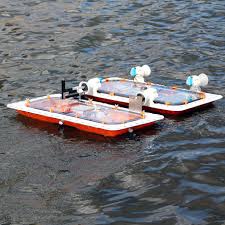 chool days. So naturally I was intrigued by a recent article I saw on Futurism about how MIT scientists, funded by the city of Amsterdam are building “self-piloting” mini-barges — “Roboats” — “to cruise its canals and make better use of waterways that have fallen out of favor for roads.”

While canals have long been an important part of Amsterdam, with the advent of the automobile they were no longer required for the commercial uses – transport of goods – they were built for. During the 20th century, a number of the city’s canals were filled in to create roadways and parking spaces. The canals were largely used for pleasure boats and tourists.

These days, the world is no longer so enamored of roadways and parking spaces, and Amsterdam is looking for a way to better utilize their canal system. And that better way is a Roboat.

Now, grad student Luis Mateos has built a new algorithm that directs the roboats to automatically latch together, according to an MIT press release. The boats can currently combine into autonomous barges, but Mateos sees a future in which autonomous boats could create temporary bridges or pop-up spaces that make waterways more accessible without requiring new city infrastructure…

For now, scientists are working with 15-square-foot prototypes, one quarter the size of an envisioned final product. These scaled-down roboats could join together to carry garbage and other cargo down the canals, while larger models could do more.

I checked out the Roboat site, and they had some information on the underpinnings behind their use of “self-driving technology to change our cities and their waterways.”

Roboats, of course, require vision technology so that the barges can avoid collisions and so that they can successfully dock together. For this, Roboat uses “a LiDAR time-of-flight sensor and a camera to view its surrounding environment. Perception methods such as clustering and neural network classifiers are used on sensor readings to recognize objects in the canal environment. “

The motion planner always considers the boat dynamics and geometry, canal boundaries, and obstacle dynamics simultaneously to calculate out the optimal obstacle-free path for the Roboat in real time. The motion planner will become even intelligent by actively learning its strategies and the surrounding dynamics in the near future.

For predictive trajectory tracking, the MIT group has built a nonlinear model predictive controller that “iteratively optimizes the control action by collectively considering the reference trajectories, the nonlinear dynamic boat model, and the thruster force constraints in a finite time horizon.” A motion planner calculates “the optimal obstacle-free path for the Roboat in real time.” The latching system will let the Roboats join together as needed to create whatever infrastructure – a bridge, a concert stage – is needed to satisfy a specific use case. For all this infrastructure to be created – by self-assembly, no less – Roboat coordination will rely on a sophisticated “platform the includes communication, sensing, and control of multiple units in the Roboat network.”

Finally, the Roboat system will be capable of environmental monitoring: water and air quality, and weather conditions.

Makes me want to go over to Amsterdam and check out the Roboat system, once it’s up and running.