Home / Blog / Looking for breakthroughs in the fight against neurodegenerative disorders

There was a recent article in the EE Times on some research funding that’s been awarded to a team Belgian researchers who are developing “a new chip to study the mechanisms of Parkinson’s disease.” The funding comes from the Chan Zuckerberg Initiative, which runs – among other efforts – the Neurodegeneration Challenge Network, a program focused on disorders like Parknson’s, Huntington’s, Alzheimer’s and ALS . (Whatever you think of Facebook’s Mark Zuckerberg, he and his wife are very philanthropic.)

There are, of course, other technologically-based research initiatives aimed at solving the riddle of Parkinson’s.

Last spring, the NIH announced a study that had examined the feasibility of deploying a self-tuning (adaptive) deep brain stimulation to alleviate Parkinson’s symptoms.

The device differs from traditional ones in that it can both monitor and modulate brain activity. In this work, sensing was done from an electrode implanted over the primary motor cortex, a part of the brain critical for normal movement. Signals from this electrode are then fed into a computer program embedded in the device, which determines whether to stimulate the brain. For this study the researchers taught the program to recognize a pattern of brain activity associated with dyskinesia, or uncontrolled movements that are a side effect of deep brain stimulation in Parkinson’s disease, as a guide to tailor stimulation. Stimulation was reduced when it identified dyskinesia-related brain activity and increased when brain sensing indicated no dyskinesia to minimize deep brain stimulation-related side effects.

This was a small-sample, short-term study, but the results look promising. Once again, embedded technology used for medical purposes.

Then there’s Patient-on-a-Chip, “a new personalized medical strategy that can replicate human biological systems in a small chip [which] may help predict patients’ response to certain treatments based on their genetic makeup.” This one comes from Cedars-Sinai Medical Center and Emulate, a bio-tech outfit.

To simulate the complex environment inside the human body, each chip has small channels lined with thousands of living human cells. The chip can receive air and fluids, such as blood, to create a microenvironment that mimics that of the human body.

Using stem cell expertise, researchers can take patients’ blood or skin cells and make any organ cell, such as those of a lung, liver or intestine. Most importantly, these cells retain the unique genetic makeup of the patient…By exposing patients’ cells in Organ-Chips to certain therapies, clinicians can gain more accurate information about how a patient would respond and could then tailor a treatment plan to that individual. (Source: Parkinson’s News Today)

MIT News reports that some of their scientists are testing new drugs with “ALS-on-a-chip” in hopes of finding a cure.

In an advance that could help scientists develop and test new drugs, MIT engineers have designed a microfluidic chip in which they produced the first 3-D human tissue model of the interface between motor neurons and muscle fibers. The researchers used cells from either healthy subjects or ALS patients to generate the neurons in the model, allowing them to test the effectiveness of potential drugs…. 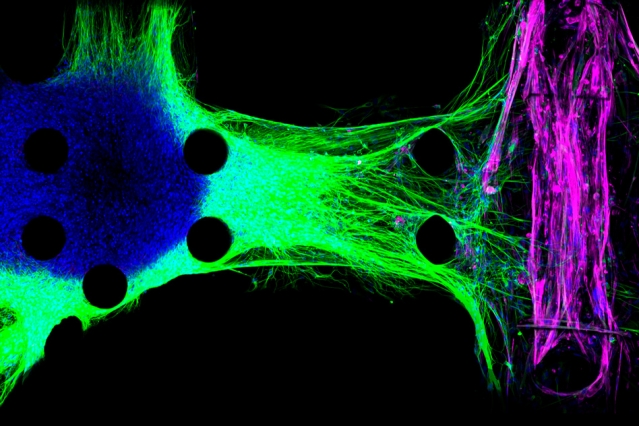 The model is then used to test drugs to see how they restore muscle strength.

Last fall, I lost my father to ALS, so this is personal to me. Finding a cure for this terrible disease, which is so very devastating for those who suffer from it and their families, is one of my greatest hopes for this new year.

I’ve said it before, but I’ll say it again: work like this makes me incredibly proud to be part of the technology industry. I often hear folks criticizing “tech”, or making fun of it because of Facebook or some other application they dislike or consider frivolous. But technology is also responsible for doing so much good for society, and the use of technology for medical breakthroughs is a prime example of this.