Home / Blog / Here we are, still talking about Moore’s Law

Moore’s Law seems to be a perennial topic in the tech press. (We’ve done our share of covering it as well. Here’s a 2017 post on the subject, and here’s an earlier take from 2014.)

For anyone who needs a reminder, Moore’s Law – which is now more than 50 years old – can pretty much be summed up as the number of components in an integrated circuit will double every year or so (without any increase in costs). Moore’s Law held for quite a while, but many observers of late have noted that we will eventually reach a point where doubling the number of components on a chip will become physically impossible. Which is not to say that IC’s continue to do more, even if the fancier things they’re doing may be pricy.

But people continue to argue Moore. And one of them is Intel’s CTO Mike Mayberry, who had an interesting piece on the subject a couple of weeks back on EE Times.

The thrust of Mayberry’s article is not to debate whether Moore is dead. It’s to offer a loo

For Mayberry, the future of Moore starts with CMOS scaling.

CMOS scaling is not yet done, and we can see continued progress as we improve our ability to control fabrication. We are not so much limited by the physics as by our ability to fabricate in high volumes with high precision. It is difficult, but we expect it to continue.

Here’s Mayberry’s illustration of what the next generation of Moore’s Law looks like: 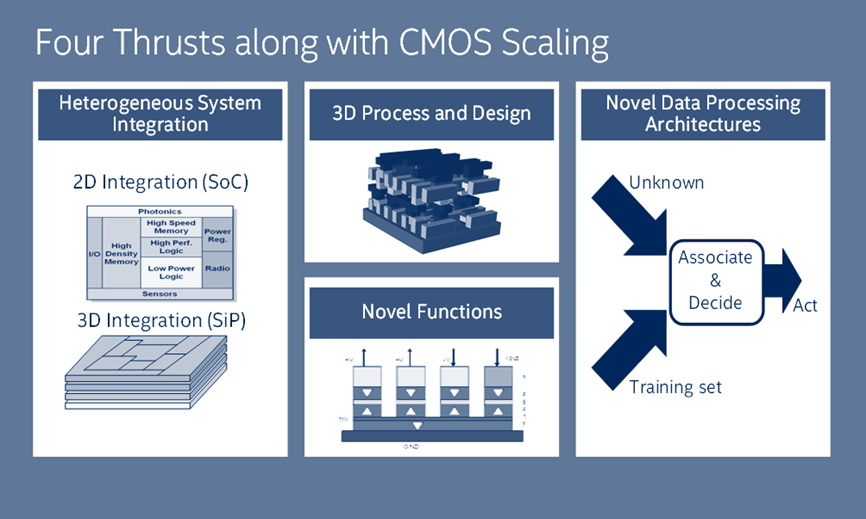 Mayberry spends a bit of time describing what Intel’s up to with 3D and with technology that “can drastically improve power-performance.”

Unfortunately, [these new devices] are not a simple replacement for CMOS. So we expect to integrate these in a heterogeneous manner, likely as layers, combining the goodness of scaled CMOS along with novel functions provided by these new devices.

He also mentions that those “novel architectures” are designed to handle the data explosion that’s been going on (and is only, in my view, going to continue to accelerate).

Pulling all this together, we expect the economic benefits of Moore’s Law to continue even as the elements look different than when Moore made his original observation. We need not be distracted by the debate but should continue to deliver ever-better products over the next 50 years.

Whether what Mayberry envisions is the future of Moore’s Law or not, I think that one thing we can count on is IC’s becoming more and more powerful.