I’m a dog person. I was going to say that I’m also a robot person, but that would sound like I’m saying I’m a robot. So not true! But I have been interested in robotics for a long time, dating back to graduate school. (Here’s a link to a 2015 post on the subject.) Because of these dual interests, I was of course interested in the news that Boston Dynamics’ robotic dog will become commercially available next year. 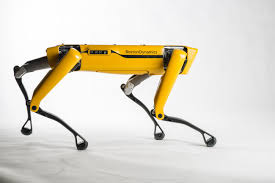 On its website, Boston Dynamics highlights that SpotMini is the “quietest robot [they] have built.” The device weighs around 66 pounds and can operate for about 90 minutes on a charge.

The company says it has plans with contract manufacturers to build the first 100 SpotMinis later this year for commercial purposes, with them starting to scale production with the goal of selling SpotMini in 2019. They’re not ready to talk about a price tag yet, but they detailed that the latest SpotMini prototype cost 10 times less to build than the iteration before it. (Source: Tech Crunch)

If you want to see SpotMini run, check out the video. It’s pretty mesmerizing to watch it, and the robot is remarkably dog-like. The video is a good indication of how sophisticated robots have become. SpotMini is pretty nimble. It can not only climb stairs, but back down them – which I’m not sure I’ve ever seen an actual dog do – at least not in my house. (There’s another video I’ve seen that shows SpotMini opening a door, which is not an idea I want to put in my dogs’ heads.)

I’m always interested in the technology that’s being used. There wasn’t a ton of info that I could find on the Boston Dynamics website, but there was this:

Spot is electrically powered and hydraulically actuated.  It senses its rough-terrain environment using LIDAR and stereo vision in conjunction with a suite of on-board sensors to maintain balance and negotiate rough terrain.  It carries a 23 kg payload and operates for 45 minutes on a battery charge.

While I find this fascinating, I won’t be trading my pups for a SpotMini. No heads to scratch. No tail wagging when you come in the door. The one advantage I can see is you don’t have to pick up after them. Other than that…