In my last post, I summarized the first six views from 12 Views on the Future of Electronics an EE Times roundup of what was on the minds of speakers at the recent Imec Technology Forum.  Here’s my summary of the second six views. (All the titles/headers are Rick Merritt’s; he’s the author of the original roundup.)

Future systems open AR, VR doors
Kazumasa Nomoto of Sony – he’s their chief user interface researcher – spoke about virtual reality and augmented reality, which he views as the way in which “we interact with tomorrow’s large-screen and mobile devices, respectively.” The technology to support this isn’t quite here yet. For VR, what’s needed is a higher rez screen with faster frames per second display, improved color support, and “better sound and haptics support with natural input devices.”

Making wires out of thin air 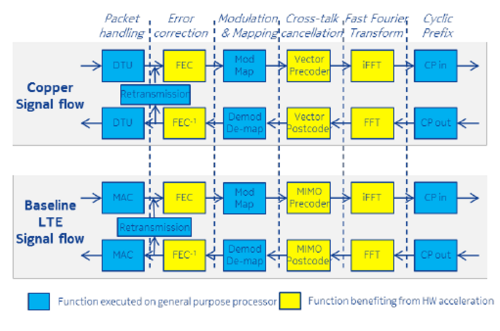 Marcus Weldon, the president of Bell Labs, spoke about wireless beam forming, saying that with it, “we’re creating the equivalent of wires in the air.” This is based on pretty much all links using “some form of EFDM and QAM modulation with forward-error correction.” And he provided a schematic to illustrate his point.

Is it just me, or is there something comforting about seeing a schematic that looks sort of old school?

16 antennas form beams at 60 GHz
Imec, which is located in Belgium, is an R&D center focused on nanoelectronics and digital technologies. At their conference, they introduced “a working 60-GHz system including a baseband chip and an array of 16 antennas for wireless beam forming.” And they’re upping the ante, working on a 256 antenna array version.

Powering up new paths to cellular IoT
Another area where Imec researchers showed off their work is the IoT, specifically in the emerging market for Narrowband IoT. They’ve got a test board with “a 40-nm power amplifier with a 27-dBm peak. It’s the first of a set of blocks to include an all-digital PLL, ADCs, and sub-GHz analog front-ends that they aim to complete and integrate into an SoC by sometime next year.”

Software scales legacy video to HDR
Researchers at Ghent University are working on “algorithms that will scale existing content to HDR.” With television manufacturers now building in high dynamic range capabilities, this is a welcome development. Philips for one is deploying parts of Ghent’s algorithms in FPGAs. While I may like those old school schematics, I’m definitely on board with improving the television picture.

Bottom line: this looked like an interesting conference, with a lot of interesting things going on.