Home / Blog / Juicero: proof positive that technology isn’t the answer for everything

I’m not sure how long the term Internet of Things (IoT) has been around, but it’s only gained noticeable traction in the last few years – likely when it began involving consumer products. Prior to that, there were plenty of interconnected devices in the scientific, industrial, medical, transportation, defense, and other worlds in which Critical Link technology plays. But, as I said, the term started becoming more prevalent once there were “things” for consumers involved.

Some of the earlier consumer-based IoT applications were both interesting, and in my opinion, sensible and even important. It really does make sense to be able to remotely monitor and control your home security or heating/cooling set up. And I’d argue that fitness trackers also fall in the sensible and useful category.  Some of the other applications…well, maybe not so much.

Who wants/needs/will pay for a refrigerator that sends you an alert when your milk’s about to expire? Maybe there’ll come a day when we’ll just take this type of app for granted, but for now, it seems sort of silly: technology in search of a problem that doesn’t really exist.

And sometimes it appears that it’s investment money in search of a “winner” that’s nothing more than not-so-useful technology in search of a non-problem. That’s the case with Juicero, which has been getting a lot of LOL press of late.

If you’ve missed the news on Juicero, they’re a silicon startup that managed to attract a ton of VC money ($120M) from the likes of Google and Kleiner Perkins. Those are smart money names, aren’t they?

Juicero produces a machine that makes juice. But it’s not just any old juice. Their model is that folks buy – from them, or course – packets of organic fruits and veggies. These short-shelf-life packets are then squeezed into juice by the Juicero juicer. The packets – if I’ve got this correct: it seems pretty exorbitant to me – cost between $5 and $8 per for a single serving. And they can only be squeezed using a Juicero juicer, which costs $400 (down from an initial price of $700).  The idea was Keurig-like: the company would get upfront money for the juicer (the razor) and ongoing money for the packets (the blades).

The Juicero has a crazy amount of technology in it, and, so far, you’re probably wondering what an expensive juicer and pricey bags of juice ingredients have to do with the IoT.

But the real kicker isn’t that this all seems like sort of a dumb application. The real kicker is that, as it turns out, the Juicero isn’t the only option you have for extracting juice from the packets. You can use your bare han 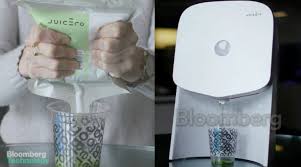 Bloomberg performed its own press test, pitting a Juicero machine against a reporter’s grip. The experiment found that squeezing the bag yields nearly the same amount of juice just as quickly—and in some cases, faster—than using the device… Reporters were able to wring 7.5 ounces of juice in a minute and a half. The machine yielded 8 ounces in about two minutes. (Source: Bloomberg)

You know, sometimes technology really isn’t the answer to everything.