It’s probably safe to say that most apps being developed these days are connected – they’re part of the Internet of Things. To some extent, a lot of IoT development has been the Wild West in terms of how to go about it, with not all that much attention being paid to standards. This was especially true on the lower, more consumer-oriented part of the market. A case in point was featured in a recent article I saw in The Wall Street Journal that described how a security video recording in a Colorado laundromat was hacked and spreading malware. The hacking was actually pretty easy, as the “security” password had been reset to 123456. Nah, no one would ever think of that. (At least it’s marginally stronger than “password.”)

On the higher-end industrial IoT side of the house, things have tended to be more rigorous and robust.

Part of the credit goes to the Industrial Internet Consortium, “a global, member-supported, organization that promotes the accelerated growth of the Industrial Internet of Things by coordinating ecosystem initiatives to securely connect, control and integrate assets and systems of assets with people, processes and data using common architectures, interoperability and open standards to deliver transformational business and societal outcomes across industries and public infrastructure.”

The bottom line: they come up with standards for developers to follow.

A few weeks ago, Rick Merritt over on EE Times wrote about their latest offering, the Industrial Internet of Things Connectivity Framework, which Rick has dubbed “a kind of decoder ring for an alphabet soup of communications-software components.” Here’s the schematic for the connectivity framework layer functions: 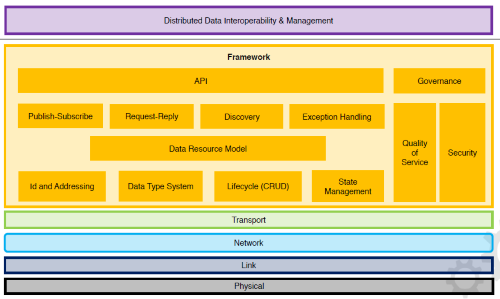 Here’s the list/links of the IIC’s technical papers, including their new connectivity framework:

If you’re developing industrial IoT applications, the work of the IIC is definitely worth checking out.