Home / Blog / Holiday shopping? Digital Trends has some ideas for you.

This past September, Simon Hill had an article on Digital Trends on “The 15 Best Tech Toys for Kids Will Make You Wish You Were 10 Again.” Most folks probably weren’t giving that much thought to toy shopping back in September, but now would seem the perfect time if you’re interested in tech toys for your kids. The piece ignored tablets and smartphones – those were treated separately – but focused instead on “interesting and unusual gadgets.” Here goes my summary.

For starters, some of these sounded familiar. That’s because some of them appeared on Simon Crisp’s roundup of best tech toys for 2016, which appeared on New Atlas, and which we blogged about here. (As an aside: do only guys named Simon review tech toys?)

The duplicates are the Sphero BB-8 app-enabled Droid which on Simon H’s list is based on the Star Wars: The Force Awakens. What could be more fun that driving a robot around with a smartphone? The Meccano Meccanoid Personal Robot is another re-run from Simon C’s list. And, like the Sphero – and many of the other ‘best tech toys for kids’, it’s pricey. (If it says “kit”, you’re looking at a price point over $100.) Made me think of Mecanno toys from back in the day, when they were mechanical and not digital.

Lower down the price chain, there’s a Mattel View-Master VR Starter Pack. Of course it’s virtual reality. As I wrote last year, “You can’t expect kids today to be all that excited by a 3D picture of Old Faithful or Mount Rushmore now, can you?”

Wonder Workshop’s Dash Robot is another toy that’s on both lists. It’s proposition is that it helps make your kids STEM kids by getting them into programming. You may have seen the funny TV ads for Dash in which a couple of moms get into over whether an educational toy can actually be more fun than learning to play Rachmaninoff on the piano.  This one looks like it could be. The final tech toy that made dual appearances is the Osmo Genius Kit Game System. This requires an iPad, but as Simon H writes, “your kids will be challenged to make different shapes, spell words, trace pictures, and play physics-based games.” (Just keep in mind what I said about the word “kit.”)

I’m not surprised that certain toys show up on multiple lists, in multiple years. Good, high-quality toys that spark a kid’s imagination have a way of lasting longer than whatever is this year’s gimmicky must-have.

There are a number of toys on Simon H’s newer list that come right after my Critical Link heart. Take the Little Bits Electronics Gizmos & Gadgets Kit, which lets kids build their own devices. I’ve been very happy i 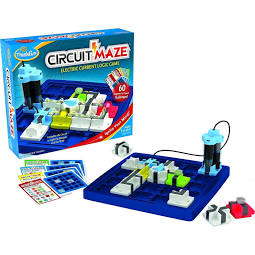 n my career to be able to build the grown up versions, but this looks like a good hands-on toy. For the same reasons, I like the Circuit Maze Board Game, a “puzzle game [that] teaches your kids all about how circuits and electricity work.” Then there’s the Kano Computer Kit, which is brightly colored – so aimed at younger kids – but includes everything a kid needs to build-their own computer, and do some programming on it once they’re done.  The SAM Labs Science Museum Inventor Kit includes “a light sensor, a buzzer, a tilt sensor, a motor” as well as “guides that encapsulate everything from Morse code to alarm systems.” No wonder I like it.What else is on the Digital Trends list?

There’s the Dino-Lite Digital Microscope that not only lets kids look at things, but lets them capture those things in photos and videos.  The CogniToys Dino is a talking dinosaur. And a pretty smart one at that: it uses IBM Watson. Marbotic offers Smart Numbers and Smart Letters that tie actual wooden numbers and letters to a tablet that lets the kids know if they’ve got it right. Good old Fisher Price makes the list with the Code-a-Pillar, a robotic caterpillar made up of sections that do something when put together in the right order. Sounds like coding to me!

The final tech toy on the list is a set of Kidz Gear Volume Limit Headphones that lets your kids pick whatever tunes they want for the road trip. You don’t have to listen, and you don’t have to worry about whether the kids are blasting the music and harming their hearing.

Lots of fun tech toys out there, that’s for sure. May not make me want to be 10 again. As I said, these days I get to play with this stuff for real. But it does kind of make me wish that I still had a kid around who’s that age.