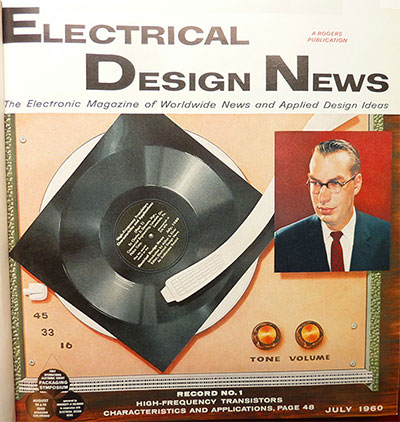 Thought I’d do one more post – maybe I should make that one more for now – based on the looks back in time that EDN has been doing on the occasion of its 60th anniversary.  This one is based on an article by Martin Rowe, in which he went back through the EDN archives – back to the days when it was Electrical Design News – and unearthed some editions in which the magazine added audio.

Today, we have such instant access to information. Anything we want to know about is pretty much at our fingertips. Actually, it may not even requirie fingertips, given that we can just ask Siri or Cortana to find something for us. And all that information is available in formats that include video. So it’s sometimes hard to appreciate that there was a time when the way engineers learned about new technology was through magazines, books, and conference papers. Not that we still don’t learn that way, it’s just that today there are so many more sources of info – some good, some bad, for plenty of it out there. I just went ahead and googled “how to design an embedded system” and got back nearly 9 million results. I didn’t look through them all, but I already know that that’s a lot of information at your fingertips, or at the tip of your tongue. And much of it’s on YouTube.

The July through October issues contained phonograph records, “an historic first in published communication,” each with an audio lecture for the article.

The audio lectures (and written articles) were the work of a Philco engineer, from back when Philco was a big deal in electronics, and are based on information specific to Philco transistors. In effect, a non-paid for advertorial, but likely not regarded in such a way at that point in time. Instead, it was likely seen as a cutting edge way to provide up to date information on an emerging technology.

The topics covered are:

In addition to the audio recordings, Rowe’s article includes thumbnails of the articles themselves (complete with schematics and graphs).

If there’s one thing that hasn’t changed about engineers over time, it’s that we’re always curious about “stuff”, so I went ahead and listened to one of the lectures. Kind of fun to listen to all those snaps, crackles, and pops.

I hope you enjoy it as much as I did.