Home / Blog / Robotic technology comes to the world of furniture 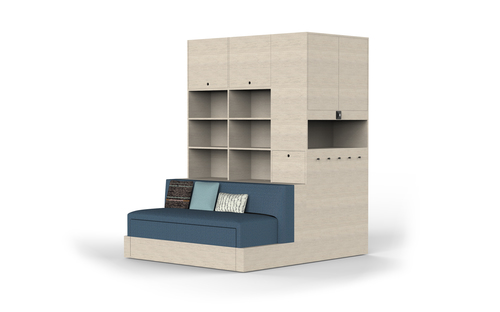 Dating back to my graduate school days – now a few decades in the rear-view mirror – I’ve had a long-running interest in robotics, and I’m always on the lookout for new applications.  One that I came across recently is from a spin-out from the MIT Media Lab. The Lab is a real innovation hub, and its current research groups focus on project “that range from digital approaches treating neurological disorders, to a stackable, electric car for sustainable cities, to advanced imaging technologies that can ‘see around a corner.’”

The Media Lab spin-out that’s been getting some press lately is Orisystems, which describes itself as “the brawn and brain of the furniture and architecture of the future.” The systems that Ori designs – and the name, by the way, is taken from origami, the Japanese paper-folding art –  are built for micro-living. Micro-living has a number of different faces. It’s the “tiny house” movement, where mostly-young folks build mostly-portable small houses (some as small as 200 square feet) and either haul them around with them, or plunk them in someone’s back yard. There are a couple of TV shows devoted to this movement, and some of what the builders do to maximize the use of space is really clever.

Another face of micro-living is the development of apartment buildings that specialize in very small units, which are largely going up in large cities where housing costs are prohibitive. From what I’ve seen, these small apartments are designed for the young and tech-savvy. And this is where Ori comes in.

“Running on modular and scalable mechatronics, Ori units seamlessly glide with the light push of a button. The on-device interface uses motion sensors to light up, with pre-settings for the different possible configurations and the ability to connect to other smart devices. Ori is the brawn and the brain of the furniture and architecture of the future.” (Source: Orisystems, where you’ll also find a couple of videos that illustrate how this all works.)

While I’ve seen it pop up in a couple of other places since, I first read about Ori in Wired.

“The first rollout is essentially a big wall of shelves with a pop-out desk, a closet, and a trundle-style bed tucked underneath. Sensor-rigged actuators are hard-wired to a control panel that attaches to the Ori wall, like a thermostat or an app. With the push of a button—or, with future versions of the software, at the sound of a voice or wave of a hand—pieces of Ori furniture will slide up, down, or over, reconfiguring spaces in mere moments… A bed can disappear, to make room for a work desk. A wall can come down, to create private spaces in an otherwise open studio apartment. A 350-square-foot apartment will, ideally, function more like a 600-square-foot one.” (Source: Wired)

As always, I’d be interested in learning the details on the technology used, but I haven’t been able to dig anything up.

In any case, you won’t be able to buy these systems off-the-shelf at IKEA. Not yet, anyway. Ori is working with developers to incorporate their systems in new buildings. Not that I’ll be in the market for a micro-apartment. We’re not quite empty-nesters yet. And then there are the dogs. And all the stuff you accumulate as life goes on. But this is definitely an interesting concept and some cool technology.