Home / Blog / “The Fantastic Voyage” may be coming true

There’s an old sci-fi movie, from the 60’s, called Fantastic Voyage. The plotline has a scientist defecting to the West, who’s shot in an assassination attempt and needs a blood clot removed from his brain. I can’t remember why they just couldn’t operate on him the old-fashioned way – I guess there wouldn’t have been a movie if they’d been able to – but what they do instead is miniaturize a submarine (and its crew, including a surgeon) and inject it into the scientist to take care of the blood clot.

Science and technology has not as yet advanced to the stage where submarines and surgeons can be micro-sized. But there have been tremendous strides made with robotic surgery and with less invasive surgical methods, and there are new technologies emerging that are very exciting. One of them was discussed in an article I saw the other day on the MIT news site.

At the recently-held International Conference on Robotics and Automation, researchers showed off, in an experiment involving a simulated esophagus and stomach, a miniature “origami robot that can unfold itself from a swallowed capsule and, steered by external magnetic fields, crawl across the stomach wall to remove a swallowed button battery or patch a wound.” 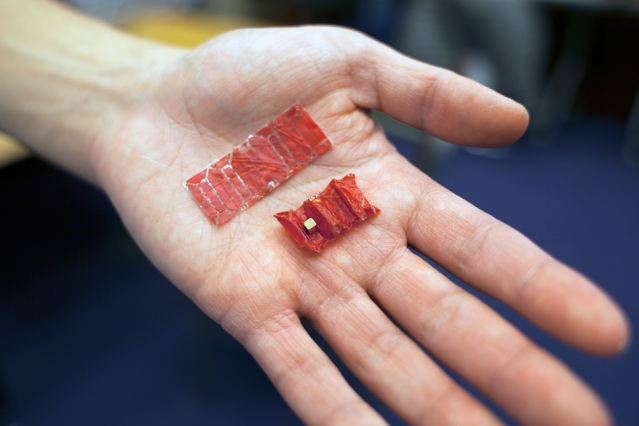 The description of the origami robot is very interesting, so take a look at the full article.  They had to make sure that the robot was tiny enough to swallow yet had the force inside to make sure that it unfolded. There’s also a magnet in side that’s controlled externally to get the robot in place. In the button battery experiment, the magnet also picked up the battery.

The choice of the button battery application is a good one.

In the old days, parents worried about their kids swallowing pennies, but those pennies mostly worked their way through the system with no harm done. When swallowed, button batteries – and the article reported that 3,500 incidents of it are reported annually in the U.S. alone – can end up causing burns to the tissue in the stomach and the esophagus, requiring invasive surgery to remove the button and treat the wounds.  With technologies like the origami robot making its fantastic voyage, those surgeries will be a thing of the past.