I was catching up on my blog reading, when I came across an interesting post (and infographic) from TI, a long-standing technology partner of Critical Link. In the post, from this past February, Adam Yager wrote about the trend toward using connected sensors to create energy efficiency in commercial buildings. Coming on the heels of last week’s post on pushback on the Internet of Things (IoT), especially on the consumer side, it was pretty apt to see something written about an area where the IoT (and wireless sensor networks) are being adopted – and are actually producing results that justify the investment. 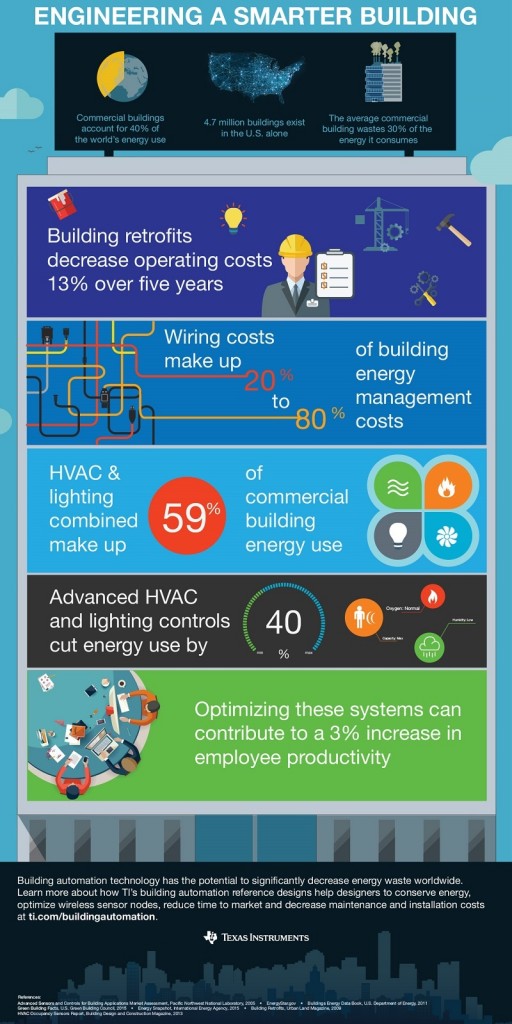 The payback for investing in energy efficiency is significant: decreased operating costs (energy use can be lowered by 40%) and increased employee productivity. (Okay. I’m a bit skeptical about that increase in productivity, but if we just leave it at the provable metric of lower costs, it’s still worth investing.)

Here’s how sensors are used to increase energy efficiency:

“In HVAC systems, intelligent monitoring and control can be achieved by adding stand-alone environmental sensors, which will take accurate temperature and humidity readings for each zone or room throughout a building… Rather than having one central temperature-monitoring device, adding multiple sensors throughout a building gives you more options to control heating and cooling zones based on occupancy or time of day.

“Large commercial buildings can use people-counting systems for demand control ventilation (DCV). DCV adds fresh air based on the amount of people occupying a room, rather than having the HVAC system turn on based on a preset control regardless of the number of occupants present.” (Source: TI blog)

Similarly, for lighting control, connected sensors would also use occupancy detectors, as well as daylight sensors that could harvest energy, to make better use of lighting. (Many of us have experience with this approach being deployed in conference rooms that aren’t in continual use.)

One reason why the IoT has gotten more traction commercially than with a consumer audience – at least in my opinion – is because they are more immediately useful and understandable, and provide real value.  Lowering energy costs by 40% is something we can all appreciate. Being able to check your fridge via smartphone to see if you need eggs (the “storyline” from a new Samsung smart refrigerator ad) is probably not going to get many consumers too excited!