Don’t know whether you caught the news, but earlier in the year a consortium of tech companies released the specs for a new Internet of Things (IoT) sensor platform, M2.COM. The entities include ARM and one of our partners, Texas Instruments.

This is a welcome development, as the IoT – especially with so many consumer devices coming quickly on board – is growing wildly. We’ve all seen the forecasts, and they are wild. Last fall, Gartner predicted that there would be over 6.4 billion connected things in use this year – and that more than 5 million new things will be connected each and every day. At the rate the IoT is growing, Gartner forecasts more than 20 billion connect things by 2020.

It’s not just the forecasts that are wild. In some sense, with the rush to get “smart” and connected products out there, the development efforts have been wild themselves.

Now the consortium has stepped forward to propose a standard platform that means developers won’t have to start from scratch each time they build a new IoT product. This will minimize development time, while also providing developers the degree of sensor flexibility they need for their varied applications. The thought behind it is that it’s not really the “thing” (i.e., the hardware) that matters in the IoT. It’s the data being gathered that gives the IoT its potential. The easier you can make it to gather that data, the more rapidly that IoT potential will be realized.

The platform has adopted the M.2 form factor. (Thus the name M2.COM…)

Shown here is a particularly interesting graphic that depicts what’s going on with the new sensor platform. This appeared in a linked article in Embedded.com’s sister publication EDN. 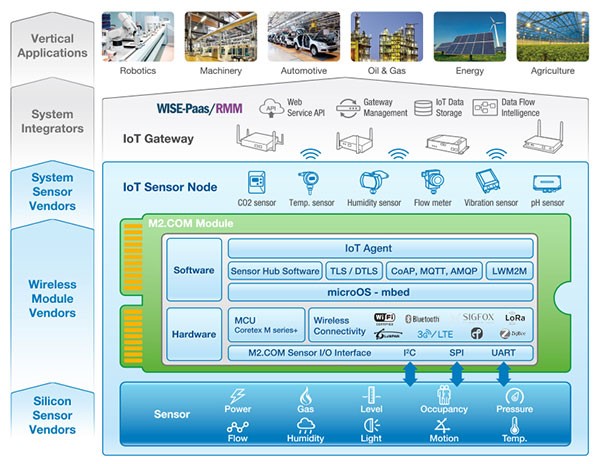 A few things worth pointing out: the M.2 form factor is small (only 30×22 mm), yet still has a 75-position host interface connector – plenty of room to support all the features needed. Also worth noting is the ARM Cortex M processing core is low-power.  Finally, the design supports a broad range of sensors. The flexibility built in to this platforms says that it’s open to expanding the platform’s overall ecosystem – plenty of room for vendors beyond the initial six in the consortium to participate.

IoT development’s been pretty wild, that’s for sure. It will be interesting to see how widely this platform will be adopted.