Home / Blog / To boldly go where no man* has gone before

Somewhere along the line, I bookmarked an article on a robot used to study volcanoes. I finally got around to reading it, and thought it would make for an interesting blog post. So here goes.

NASA’s Jet Propulsion Laboratory (JPL) is using 3D vision-enabled robots that are dropped into volcanoes so that scientists can get a better understanding of how and why volcanoes erupt.

“The first iteration of the project, VolcanoBot1, was tested at Kilauea volcano in Hawaii in May of 2014. The robot, which is equipped with a 3D sensor that looks similar to a Microsoft Kinect, was able to descend to depths of 82 ft. in two locations on the volcano’s fissure. Using VolcanoBot, the researchers were able to create a 3D map of the fissure. During the project, the VolcanoBot 1 also discovered that the fissure does not pinch shut at the bottom, so the team decided to build another version of the robot in order to go even deeper and investigate further.” (Source: Vision Systems)

VolcanoBot 2 is a smaller and lighter version, and also comes with an “electrical connection that is more secure and robust so that researchers can use the 3D sensor’s live video feed to navigate.” The visualization sensors in VolcanoBot 2 can also be rotated. The new version is supposed to go into operat 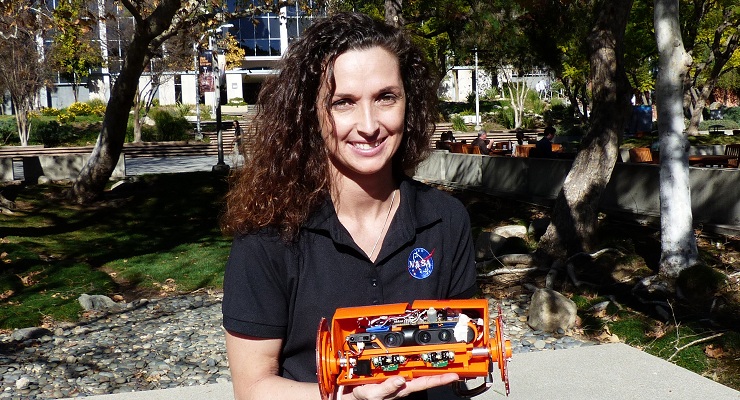 ion sometime this year. The original date was supposed to be March, but I couldn’t find any evidence that this has as yet happened.  (This picture of JPL scientist Carolyn Parcheta, whose project this is, will give you a good sense of just how small the Volcano Bot 2 is. No wonder it can boldly go into volcano fissures where no man (or woman) has gone before.”

I’m a bit disappointed that I couldn’t find much technical information on the Volcano Bots. If nothing else, I’d like to have a bit more detail on what sensors were being used. (I’m not that familiar with 3-D sensors, but did find an article on them in PC Magazine.)

Anyway, Volcanists at NASA – I almost wrote vulcanists!  – are testing their robots out on earth, with hopes of being able to use them to explore volcano sites on Mars and the moon.

*There’s a Google limit. The real title is “To boldly go where no man (or woman) has gone before