Home / Blog / That is one massive HD display 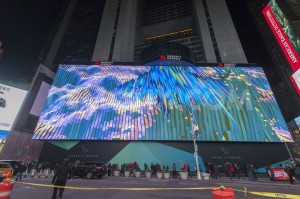 I was in New York City over Thanksgiving and while I was there, I couldn’t help but notice the massive new LED screen in Times Square.

Did I say massive?

An article I saw on it in Reuters reported that it’s the “world’s largest high-definition video display…with nearly 24 million LED pixels.” (There are larger display screens at various locations around the world, including one in Las Vegas, but this is the biggest HD one.) It’s “longer than a football field and eight stories high”, and was turned on for the first time the day before Thanksgiving. So I was pretty much there for its introduction.

When I saw it, Google was doing the advertising, but, not surprisingly, I’m a bit more interested in the technology than what’s being advertised.

The technology is a Diamond Vision display from Mitsubishi Electric Power Products, and:

…exceeds 4k ultra-high-definition pixel density. The display is a massive 25,610-square-feet, and with a pixel density of 2,368 x 10,048, it will be the highest resolution LED video display in the world of this size. The installation will employ a Mitsubishi Electric Diamond Vision AVL-ODT10 large-scale display which provides true 10mm pixel pitch spacing and uses a 3-in-1 surface mount LED (SMD) featuring Mitsubishi Electric’s revolutionary Real Black™ LED technology. (Source: Mitsubishi press release on BusinessWire.)

Pretty impressive, I’ve got to admit.

But, personally, not quite as impressive as what brought me to NYC over Thanksgiving, which was watching my younger daughter and her bandmates in the Baldwinsville High School Marching Band perform in the Macy’s Thanksgiving Day Parade. Here’s the link to the YouTube of the band doing a Daft Punk medley, on nationwide TV. Couldn’t be prouder!