A couple of weeks ago, I blogged about wearable technology.

Shortly after the post appeared, I got an e-mail from a friend in Boston who wrote to me about her wearable tech: a pass for using the “T”, Boston’s public transportation system. It’s called the Sesame Ring, and it kind of looks like some 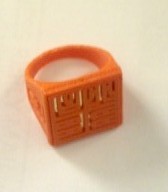 thing that my grandfather might have ordered out of the back of a comic book during the 1930’s – a magic decoder ring or something.

The ring was created by a couple of MIT students as a replacement for the Charlie Card, the smart card used by T riders.

The ring and the Charlie Card work the same way. They both contain “stored value”, and each time you get on a bus or a subway, you tap your card against the fare box. The fare box reads the card/ring and the cost is deducted from the stored value, which can be topped off at vending machines in subway stations. There’s a video showing how all this works on Ring Theory’s site. (That’s the company founded by the MIT students.)

For many riders (apparently including my Boston friend), the ring – which has only been GA for a short while – is more convenient than fumbling around trying to find your wallet and getting your Charlie Card out.

Ring Theory’s founders are hoping that the idea takes off, and that it gets used for other applications, like replacing keys.

The Sesame Ring is interesting on a lot of fronts.

For one thing, it was funded via Kickstarter, and “investors”, like my friend, got their rings before they were generally available. For another, it’s made using 3D printing, and can be infinitely customizable, which is kind of cool. And there’s the fact that the ring is the brainchild of a couple of creative, techie kids who had an idea and ran with it.