Last month, on a trip to New Hampshire, I stopped at a state welcome center, and encountered a vision-based people counter. 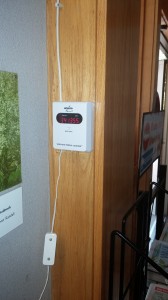 What I first saw of it was this counter, which was in plain view, but on the side of the moulding. It wasn’t all that obvious, but I’m an engineer, so I’m always on the lookout for things of technical interest. The counter was clearly unprotected, so I could have played with it a bit if I’d wanted to. Not that I would have, mind you…

While I resisted the urge to do anything more than snap a picture of the counter with my smartphone, I was curious about how they were doing the counting. So I followed the wires.

I didn’t really expect to see a bored summer employee or a happy-to-be-there retiree on the other end of it, sitting there on a stool, clicker in hand, so I wasn’t surprised that what was  on the other end was a ceiling-mounted camera.

This particular system is from Amseco/Potter Electric. I couldn’t see any model number, but I did want to look at the specs.  Among other things I found out about the  VDP-100 VIDEO-EYE PEOPLE COUNTER™ from its data sheet:

DSP they use is a Blackfin processor from Analog Devices,which I couldn’t tell from the     outside looking in (especially given the tamper protection). And the connection is wired, not wireless, as I could tell by following the wires with my own two eyes.

Anyway, it’s got to a be lot more accurate than a human-based people counter system, although I will note that the reading was that 341 people entered, and 355 exited. Seems like those data points should have been reversed, but maybe a few folks managed to sneak in somehow…